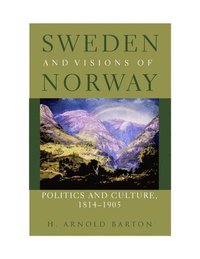 Sweden and Visions of Norway

av H Arnold Barton
Inbunden Engelska, 2002-12-01
579
Köp
Spara som favorit
Skickas inom 10-15 vardagar.
Fri frakt inom Sverige för privatpersoner.
H. Arnold Barton investigates Norwegian political and cultural influences in Sweden during the period of the Swedish-Norwegian dynastic union from 1814 to 1905. After a proud medieval past, Norway had come under the Danish crown in the fourteenth century and had been reduced to virtually a Danish province by the sixteenth. In 1814 Denmark relinquished Norway, which became a separate kingdom, dynastically united with Sweden with its own constitutional government. Disputes during the next ninety-one years caused Norway unilaterally to dissolve the tie in 1905. Barton is the first historian to look beyond the cultural conflicts and examine the impact of the union on internal developments, particularly in Sweden. Prior to 1814, Norway, unlike Sweden, had no constitution and only the rudiments of higher culture, yet paradoxically, Norway exerted a greater direct influence on Sweden. Reflecting a society lacking a native nobility, Norway's 1814 constitution was - with the exception of that of the United States - the most democratic in the world. It became the guiding star of Swedish liberals and radicals striving to reform the antiquated system of representation in their parliament. Norway's cultural void was filled with a stellar array of artists, writers, and musicians, led by Bjoornsjerne Boornson, Henrik Ibsen, and Edvard Grieg. From the 1850s through the late 1880s, this wave of Norwegian creativity had an immense impact on literature, art, and music in Sweden. By the 1880s, however, August Strindberg led a revolt against an exaggerated ""Norvegomania"" in Sweden. Barton sees this reaction as a fundamental inspiration to Sweden's intense search for its own cultural character in the highly creative Swedish National Romanticism of the 1890s and early twentieth century.
Visa hela texten

Barton is, I think it is safe to say, the most respected historian concentrating on Scandinavlan issues currently active in the United States and... [his] breadth of knowledge is on display in the current volume, which focuses on the political and cultural impact of the union between Sweden and Norway. Though Sweden was the politically dominant partner in the union, Barton argues convincingly that for much of the nineteenth century, the cultural influence was primarily in the other direction. -Rochelle Wright, author of The Visible Wall: Jews and Other Ethnic Outsiders in Swedish Film

H. Arnold Barton is a professor emeritus of history at Southern Illinois University Carbondale. He is the author of Northern Arcadia: Foreign Travelers in Scandinavia, 1765-1815; A Folk Divided: Homeland Swedes and Swedish Americans, 1840-1940; and The Search for Ancestors: A Swedish-American Family Saga. In 2000, His Majesty Carl XVI Gustaf of Sweden bestowed on Barton the insignia of Commander of the Royal Order of the Polar Star.