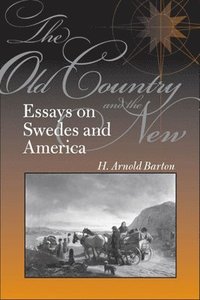 The Old Country and the New

Essays on Swedes and America

av H Arnold Barton
Inbunden Engelska, 2006-12-01
619
Köp
Spara som favorit
Skickas inom 10-15 vardagar.
Fri frakt inom Sverige för privatpersoner.
This notable collection of seventeen essays and six editorials by renowned Swedish American historian H. Arnold Barton was compiled from writings published between 1974 and 2005. The result of three decades of extensive research in the United States and Sweden, ""The Old Country and the New: Essays on Swedes and America"", covers Swedish emigration to North America as well as the history and culture of Swedes in their new country. In this rich mosaic of American ethnicity and cultural history, Barton analyzes the multifaceted Swedish emigration/immigration story. Essays include a survey of the historiography of emigration from the Scandinavian countries and the Scandinavian immigration to North America, Swedish emigration before 1846, and the Eric-Janssonist religious sect and its colony at Bishop Hill, Illinois. Because Swedish immigrants were highly literate people, they wrote numerous letters describing their experiences to relatives and friends at home. What these letters related - or omitted - is the subject of another essay. Barton discusses Swedish immigrants who returned permanently to their homeland, affecting both the old country and the new. He also traces relations between the United States and Sweden, post-World War II Swedish immigration, and genealogy as history. Offering a broad Scandinavian American ethnic perspective, ""The Old Country and the New"" appeals to both scholars and lay readers. Sixteen illustrations and a complete bibliography of Barton's publications on Swedish American history and culture enhance the volume.
Visa hela texten

Bloggat om The Old Country and the New

H. Arnold Barton, professor emeritus of history at Southern Illinois University Carbondale, is one of the nation's foremost scholars of Nordic and Swedish American studies. Among his books are Letters from the Promised Land: Swedes in America, 1840-1914; The Search for Ancestors: A Swedish American Family Saga; Northern Arcadia: Foreign Travelers in Scandinavia, 1765-1815; A Folk Divided: Homeland Swedes and Swedish Americans, 1840-1940; and Sweden and Visions of Norway: Politics and Culture, 1814-1905. He was made Knight-Commander of the Royal Swedish Order of the Polar Star in 2000 by King Carl XVI Gustaf of Sweden and was named Swedish American of the Year in 1988 by the Royal Swedish Ministry of Foreign Affairs and the Vasa Order of America.