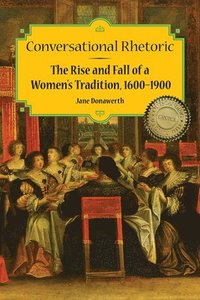 av Jane Donawerth
Häftad Engelska, 2013-08-23
539
Bevaka
Spara som favorit
Tillfälligt slut – klicka "Bevaka" för att få ett mejl så fort boken går att köpa igen.
Finns även som
Visa alla 1 format & utgåvor
Much of the scholarly exchange regarding the history of women in rhetoric has emphasized women's rhetorical practices. In Conversational Rhetoric: The Rise and Fall of a Women's Tradition, 1600-1900, Jane Donawerth traces the historical development of rhetorical theory by women for women, studying the moments when women produced theory about the arts of communication in alternative genres-humanist treatises and dialogues, defenses of women's preaching, conduct books, and elocution handbooks. She examines the relationship between communication and gender and between theory and pedagogy and argues that women constructed a theory of rhetoric based on conversation, not public speaking, as a model for all discourse. Donawerth traces the development of women's rhetorical theory through the voices of English and American women (and one much-translated French woman) over three centuries. She demonstrates how they cultivated theories of rhetoric centered on conversation that faded once women began writing composition textbooks for mixed-gender audiences in the latter part of the nineteenth century. She recovers and elucidates the importance of the theories in dialogues and defenses of women's education by Bathsua Makin, Mary Astell, and Madeleine de Scudery; in conduct books by Hannah More, Lydia Sigourney, and Eliza Farrar; in defenses of women's preaching by Ellen Stewart, Lucretia Mott, Catherine Booth, and Frances Willard; and in elocution handbooks by Anna Morgan, Hallie Quinn Brown, Genevieve Stebbins, and Emily Bishop. In each genre, Donawerth explores facets of women's rhetorical theory, such as the recognition of the gendered nature of communication in conduct books, the incorporation of the language of women's rights in the defenses of women's preaching, and the adaptation of sentimental culture to the cultivation of women's bodies as tools of communication in elocution books. Rather than a linear history, Conversational Rhetoric follows the starts, stops, and starting over in women's rhetorical theory. It covers a broad range of women's rhetorical theory in the Anglo-American world and places them in their social, rhetorical, and gendered historical contexts. This study adds women's rhetorical theory to the rhetorical tradition, advances our understanding of women's theories and their use of rhetoric, and offers a paradigm for analyzing the differences between men's and women's rhetoric from 1600 to 1900.
Visa hela texten

Jane Donawerth is a professor of English at the University of Maryland and the editor of Rhetorical Theory by Women before 1900: An Anthology.