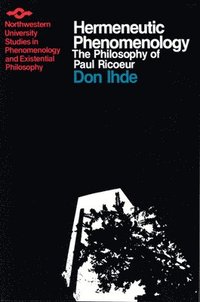 The Philosophy of Paul Ricoeur

Don Ihde is one of the founders of a distinctly North American approach to phenomenology in work that centers around technology. After completing his B.A. degree at the University of Kansas (1956), he earned a Master of Divinity degree at Andover Newton Theological School (1959) and a Ph.D. at Boston University (1964). His doctoral dissertation on the phenomenology of Paul Ricoeur set the stage for later original contributions to phenomenological analysis. Ihde taught at Southern Illinois University before moving to the State University of New York at Stony Brook, where, since 1969, he has served at different times as Head of Philosophy and Dean of Liberal Arts and Humanities. In the mid-1970s, together with his colleagues at Stony Brook, Ihde developed an intentionally eclectic school of experienced-based "experimental phenomenology" with bridges to pragmatism, which has concentrated on elaborating the ways that instrumentation mediates between human beings and the world. His book Technics and Praxis (1979) was the first real work on the philosophy of technology in English. In 1990 Ihde, together with Indiana University Press, initiated a new monograph series in philosophy of technology that has since become one of the most influential collection of publications in the field.