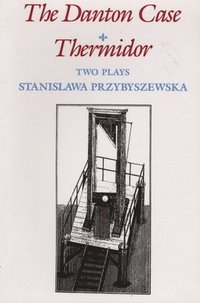 The Danton Case and Thermidor

av Stanislawa Przybyszewska, Boleslaw Taborski
Häftad Engelska, 1989-12-01
459
Bevaka
Spara som favorit
Tillfälligt slut – klicka "Bevaka" för att få ett mejl så fort boken går att köpa igen.
Stanislawa Przybyszewski is recognized as a major twentieth-century playwright on the basis of her trilogy about the French Revolution, of which The Danton Case and Thermidor are the principal parts. The Danton Case depicts the battle for power between two exceptional individuals: the corrupt sentimental idealist, Danton, and the incorruptible genius of the Revolution, Robespierre. Thermidor shows the final playing out of this drama, as Robespierre, left alone with the heroic absolutist Saint-Just, foresees the ruin of himself and his cause, and in his despair predicts that hatred, war, and capitalism will steal the Revolution and corrupt nineteenth-century man.
Visa hela texten

Stanislawa Przybyszewski (1901-35), the illegitimate daughter of the modernist writer Stanislaw Przybyszewski, became famous in her own right only after her death. Today she is recognized as a major twentieth-century playwright on the basis of her trilogy about the French Revolution, of which The Danton Case and Thermidor are the principal parts. Boleslaw Taborski, a poet, theatre critic, and translator, is the author of Byron and the Theatre and Polish Plays in English Translations: A Bibliography. His translations also include two works by Karol Wojtyla (Pope John Paul II), Collected Plays and Writings on Theatre and The Jeweler's Shop, and Jan Kott's Shakespeare Our Contemporary. He lives in London. Daniel Gerould is Distinguished Professor of Theatre and Comparative Literature at the Graduate School of the City University of New York. He has published numerous translations of Polish works and with Jadwiga Kosicka is the co-author of A Life of Solitude: Stanislawa Przybyszewska: A Biographical Study with Selected Letters, also published by Northwestern University Press.