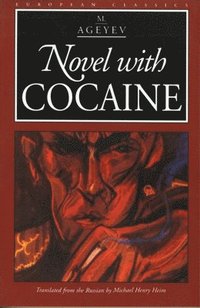 av M Ageyev
Häftad Engelska, 1995-05-01
199
Köp
Spara som favorit
Fåtal ex i lager. Skickas inom 1-2 vardagar.
Fri frakt inom Sverige för privatpersoner.
A Dostoevskian psychological novel of ideas, Novel with Cocaine explores the interaction between psychology, philosophy, and ideology in its frank portrayal of an adolescent's cocaine addiction. The story relates the formative experiences of Vadim at school and with women before he turns to drug abuse and the philosophical reflections to which it gives rise. Although Ageyev makes little explicit reference to the Revolution, the novel's obsession with addictive forms of thinking finds resonance in the historical background, in which "our inborn feelings of humanity and justice" provoke "the cruelties and satanic transgressions committed in its name.
Visa hela texten

M. Ageyev is a pseudonym. Following the publication of Novel with Cocaine in a Paris-based Russian emigre journal in the early 1930s, the author, then living in Istanbul, sent a passport and a short story to a friend in Paris. The short story was published, the passport lost. Nobody has ever identified the author. Michael Henry Heim, winner of the 1998 PEN Center USA West Translation Award for A Bohemian Youth by Josef Hirsal (Northwestern, 1997), is a professor of Slavic languages and literatures at UCLA. His other translations for Northwestern University Press include Dubravka Ugresic's Fording the Stream of Consciousness and Felix Roziner's A Certain Finkelmeyer.