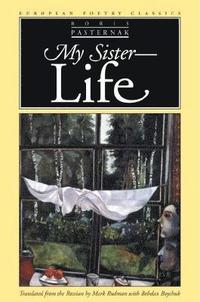 av Boris Pasternak
Häftad Engelska, 2001-10-01
189
Köp
Spara som favorit
In Russian poetry, Boris Pasternak's ""My Sister-Life"" is the equivalent of ""The Waste Land"", ""Spring"", and ""Harmonium"". Written in 1917, the cycle of poems in ""My Sister-Life"" concentrates on personal journeys and loves, but is permeated by the tension and promise of the impending October revolution. Pasternak is an uncompromisingly complex poetic stylist, and his meticulous attention to structure, etymology, and phonetic qualities of words makes his poetry a formidable challenge for the translator.
Visa hela texten

BORIS PASTERNAK (1890-1960) won the Nobel prize in literature in 1958. He is best known in the West for his novel Doctor Zhivago. MARK RUDMAN is an adjunct professor at NYU. His books include Rider (Wesleyan, 1994), which received the National Book Critics Circle Award in Poetry for 1994; Realm of Unknowing: Meditations on Art, Suicide, and Other Transformations (Wesleyan, 1995), and The Couple (2001). Rudman also received the Max Hayward Award from the Translation Center at Columbia University for My Sister - Life. BOHDAN BOYCHUK is a prominent Ukranian poet who critiqued and guided Rudman's version of Pasternak.