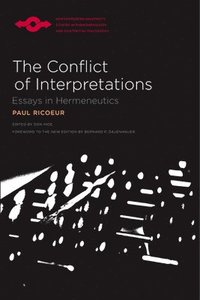 The Conflict Of Interpretations

av Paul Ricoeur, Anthony Steinbock, Don Ihde
Häftad Engelska, 2007-11-01
379
Köp
Spara som favorit
Skickas inom 10-15 vardagar.
Fri frakt inom Sverige för privatpersoner.
Finns även som
Visa alla 1 format & utgåvor
This collection brings together twenty-two essays by Paul Ricoeur under the topics of structuralism, psychoanalysis, hermeneutics, and religion. In dramatic conciseness, the essays illuminate the work of one of the leading philosophers of the day. Those interested in Ricoeur's development of the philosophy of language will find rich and suggestive reading. But the diversity of essays also speaks beyond the confines of philosophy to linguists, theologians, psychologists, and psychoanalysts.
Visa hela texten

Bloggat om The Conflict Of Interpretations

Paul Ricoeur (1913-) is Professor Emeritus of Philosophy at the University of Chicago and Dean of the Faculty of Letters and Human Sciences at the University of Paris X, Nanterre. One of the foremost contemporary French philosophers, his work is particularly concerned with symbolism, the creation of meaning and the interpretation of texts. Don Ihde is Distinguished Professor of Philosophy at Stony Brook University. He is the author of numerous books, including Postphenomenology: Essays in the Postmodern Context, published by Northwestern University Press. Bernard P. Dauenhauer is a professor emiritus of philosophy at the University of Georgia. Among his several books are The Politics of Hope and Silence, the Phenomenon and Its Ontological Significance.