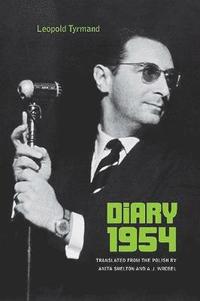 av Leopold Tyrmand
Häftad Engelska, 2014-03-31
309
Köp
Spara som favorit
Finns även som
Visa alla 1 format & utgåvor
Leopold Tyrmand, a Polish Jew who survived World War II by working in Germany under a false identity, would go on to live and write under Poland's Communist regime for twenty years before emigrating to the West, where he continued to express his deeply felt anti-Communist views. Diary 1954-written after the independent weekly paper that employed him was closed for refusing to mourn Stalin's death-is an account of daily life in Communist Poland. Like Czes?aw Mi?osz, Vaclav Havel, and other dissidents who described the absurdities of Soviet-backed regimes, Tyrmand exposes the lies-big and small-that the regimes employed to stay in power. Witty and insightful, Tyrmand's diary is the chronicle of a man who uses seemingly minor modes of resistance-as a provocative journalist, a Warsaw intellectual, the ""spiritual father"" of Polish hipsters, and a promoter of jazz in Poland-to maintain his freedom of thought.
Visa hela texten

"The year 1954: Stalin was dead but Stalinism not yet. Leopold Tyrmand, a dandy, lived in a Warsaw which was slowly beginning to breathe. Half document, half elaborate, stylized literary diary, this book is a window through which we gaze at a fascinating spectacle: how human life can be reborn after catastrophes." - Adam Zagajewski, author of Unseen Hand: Poems "Absolutely essential reading for anyone who wants to understand the culture, not just the politics, of Stalinism."--Anne Applebaum, author of Iron Curtain: The Crushing of Eastern Europe, 1944-1956

Leopold Tyrmand (1920-1985) published his diary, books of fiction, journal articles, and essays on music in Poland. In 1966 he left Poland for the United States, where he wrote articles for the New Yorker, the New York Times, Commentary, and the American Scholar. Later, he cofounded Chronicles of Culture, now Chronicles: A Magazine of American Culture. Anita Shelton is a professor of history at Eastern Illinois University, USA. Andrzej Wrobel has been a senior research fellow at the London School of Economics, UK and at Tilburg University in the Netherlands.