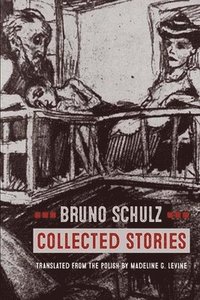 av Bruno Schulz
Häftad Engelska, 2018-03-15
219
Köp
Spara som favorit
Collected Stories is an authoritative new translation of the complete fiction of Bruno Schulz, whose work has influenced writers as various as Salman Rushdie, Cynthia Ozick, Jonathan Safran Foer, Philip Roth, Danilo Kis, and Roberto Bolano. Schulz's prose is renowned for its originality. Set largely in a fictional counterpart of his hometown of Drohobycz, his stories merge the real and the surreal. The most ordinary objects-the wind, an article of clothing, a plate of fish-can suddenly appear unfathomably mysterious and capable of illuminating profound truths. As "Father," one of his most intriguing characters, declaims: "Matter has been granted infinite fecundity, an inexhaustible vital force, and at the same time, a seductive power of temptation that entices us to create forms." This comprehensive volume includes all of The Cinnamon Shops, restoring the original Polish title to Schulz's most famous collection (sometimes titled The Street of Crocodiles in English), and Sanatorium under the Hourglass. Also included are four previously uncollected short stories that pay tribute to Schulz's enduring genius. Madeline G. Levine's masterful new translation shows contemporary readers how Schulz, often compared to Proust and Kafka, reveals the workings of memory and consciousness.
Visa hela texten

Levine has taken on the monumentally difficult task of retranslating Bruno Schulz's stories, and her work is both courageous and impressive. Her fidelity to the original text ensures that her translation will make a significant contribution to the reception of Bruno Schulz in English."" - Stanley Bill, Lecturer in Polish Studies at the University of Cambridge

Bruno Schulz (1892-1942) was a Polish Jew born in Drohobycz, at the time a city in Austrian Galicia. He published two volumes of short fiction during his life. Killed by a Nazi officer in German-occupied Drohobycz, Schulz achieved posthumous fame as one of the most influential European fiction writers of the twentieth century. Madeline G. Levine is Kenan Professor of Slavic Literatures Emerita at the University of North Carolina, Chapel Hill. Her translations from the Polish include The Woman from Hamburg and Other True Stories by Hanna Krall, Bread for the Departed by Bogdan Wojdowski, and four volumes of prose by Czeslaw Milosz, including Beginning with My Streets: Essays and Recollections and Milosz's ABC's.