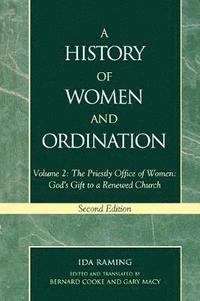 A History of Women and Ordination

The Priestly Office of Women: God's Gift to a Renewed Church

av Ida Raming, Gary Macy, Bernard Cooke
Inbunden Engelska, 2004-04-01
919
Köp
Spara som favorit
During the past half century, few issues have been more prominent and disputed in religious circles than the ordination of women. This has been most acutely felt in the Roman Catholic, Orthodox and Anglican Churches, but other Christian and Jewish have also been immersed in the debate. For decades, Professor Ida Raming has been one of the leaders in the forefront of the argument in favor of the ordination of women. First published by Scarecrow Press in 1976, Dr. Raming has recently republished her classic German study accompanied by an invaluable updated international bibliography as well as three recent articles that provide scholarly responses to the Vatican's position. This second edition provides an English translation of the new updated German edition. Also provided is an English translation of all the canonical sources quoted by Raming and a chronological bibliography on women's ordination from 1973 to the present. Any scholar interested in this volatile and intriguing question will welcome this scholarly resource.
Visa hela texten

Ida Raming's book sheds much light on the canonical roots of the Roman Catholic stance against the ordination of women. For this reason it is a useful work. Its bibliographies and appendixes will assist anyone looking to better understand the current push toward the priesthood of women. * Doxology * ...a tour de force for the women's ordination movement...a must-read...for anyone who wants to thoroughly understand the church's teachings on women and priesthood, this is a critical resource....clear and precise... * New Women, New Church * This English edition, edited and translated by Bernard Cooke and Gary Macy, lays out Dr. Raming's argument for why Canon Law 1024, which prohibits the ordination of women, stands in contradiction to Vatican II. The bibliographic resources are valuable for exploring ordination as such even as the discourse has moved on to feminist approaches to ministry. * Waterwheel *

Ida Raming is a pioneer in the women's ordination movement in the Catholic Church. She is also author of The Exclusion of Women from the Priesthood: Divine Law or Sex Discrimination? (Scarecrow Press, 1976). She was ordained to the Roman Catholic priesthood on June 29, 2002. Bernard Cooke is a prominent U.S. theologian who has served as president of both the College Theology Society and the Catholic Theological Society of America, receiving from the latter its John Courtney Murray Award. Gary Macy is a professor of Religious Studies at the University of San Diego.