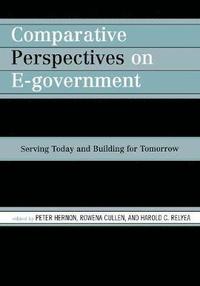 Serving Today and Building for Tomorrow

av Peter Hernon, Rowena Cullen, Harold C Relyea
Häftad Engelska, 2006-05-01
659
Köp
Spara som favorit
Finns även som
Visa alla 1 format & utgåvor
In the 1990s, many governments began to use information and communications technologies, especially Internet applications, to improve the efficiency and economy of government operations and to provide their citizens, the business community, and government officials with information and services. The goal of e-government is to become entrenched in the everyday lives of these people so that they become reliant on Internet access to government. Comparative Perspectives on E-government draws upon the expertise of its contributors, who have conducted research and policy analyses related to government information policy and e-government, and who have published previously in these areas. The focus of coverage is on five countries (Australia, Canada, New Zealand, the United Kingdom, and the United States) and topical issues such as the digital divide, the balance between access and security in the aftermath of 9-11, trust in government, the citizen's perspective on e-government, and the evaluation of government Web sites. The book addresses the need to understand the phenomenon of e-government better_its development, mission and goals, success in achieving those goals, and future plans_extending an inquiry to both developed and developing countries. An additional need for detailed cross-country analyses and comparisons, introduced here, is also addressed.
Visa hela texten

The concern here is not whether citizens, businesses, and government officials should become reliant on Internet access to government, but the obstacles to that goal and how they may be most effectively overcome. Researchers in Australia, Canada, New Zealand, Britain, and the US discuss such aspects as the digital divide, the balance between access and security after 9/11, trust in government, citizens' perspectives, and the evaluation of government Web sites. * Reference and Research Book News, August 2006 * ...this is an outstanding contribution to a rapidly developing area of research. * The Electronic Library, Vol. 24, No. 6, 2006 * ...an interesting study... * Australian Academic & Research Libraries * Comparative Perspectives on E-government collects for its readers, in one volume, the thoughtful analysis of the discourse of information policy most important to researchers. It is a wonderful entrance into a developing political institution. * College & Research Libraries, Vol. 68, No. 1 (January 2007) * This edited volume brings fresh research perspectives on comparative e-government. The authors provide in-depth anaylses of the evolution, nature, and emerging impact of e-government on public service....The authors do a superb job of describing how public institutions provide and regulate e-governments. -- Eric E. Otenyo, Northern Arizona University * Journal of Information, Technology & Politics *