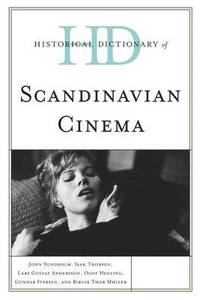 av John Sundholm, Isak Thorsen, Lars Gustaf Andersson, Olof Hedling, Gunnar Iversen
Inbunden Engelska, 2012-09-20
2153
Köp
Spara som favorit
Finns även som
Visa alla 1 format & utgåvor
Although relatively small, the northern countries of Scandinavia have made a disproportionately large contribution to world cinema. Indeed, some of their films are among the best known of all times, including The Seventh Seal, Dancer in the Dark, and The Girl with the Dragon Tattoo. And Scandinavian directors are also among the best known, just to mention Ingmar Bergman and Lars von Trier. But there is much more to the cinema of Denmark, Norway, Sweden, Finland and Iceland than that, and this book shows us what they have been accomplishing over more than a century from the beginnings of cinema until the present. The Historical Dictionary of Scandinavian Cinema shows just how long and busy this history has been in the chronology, starting in 1896. The introduction then describes the situation in each one of the component countries, all of which approached and developed the field in a similar but also slightly different manner. The dictionary section, with over 400 substantial entries, looks at the situation in greater detail, with over 400 substantial entries on major actors, directors and others, significant films, various genres and themes, and subjects such as animation, ethnicity, migration and censorship. Given its contribution to world cinema it is good to finally have an encyclopedia like this which can meet the interests of the scholar and researcher but also the movie fan.
Visa hela texten

Denmark, Finland, Iceland, Norway, and Sweden have been the source of some of the world's greatest films, directors, actors, and actresses. Including works like Ingmar Bergman's haunting The Girl with the Dragon Tattoo, Scandinavian cinema dates back to 1897. Five film studies professors have here combined their talents to produce 400 cross-referenced entries covering the industry's people, films, themes, and studios. These are preceded by detailed cinematic histories of each country and a list of acronyms and followed by a detailed bibliography arranged by country and then by topic. * Library Journal (Reference) * A welcome addition to the literature....Since the authors seek to accommodate readers at all levels of familiarity with Scandinavian film, the book serves as an excellent starting point as well as an ongoing reference for further study. * American Reference Books Annual * Scandinavian cinema has a rich and varied history but, aside from a handful of names and titles, is relatively unknown in America. This dictionary of directors, actors, films, genres, film companies, studios, and governmental institutions associated with cinema in Denmark, Finland, Iceland, Norway, and Sweden attempts to remedy that. It includes a chronology and detailed bibliography (though many of the cited titles are not in English) and a 35-page introduction to provide context....Most appropriate for academic and public libraries with comprehensive film collections. * Booklist * [T]his is a very good single-volume introduction to the history of Scandinavian cinema. Its passages are longer than dictionary entries, shorter than encyclopedic essays, and more browser friendly than either, making it well suited for general readers and lower-division undergraduates. * s *

John Sundholm, who organized the production of this volume, is professor in film studies at Karlstad University in Sweden. He has written extensively on experimental cinema and is the co-author of several books including A History of Swedish Experimental Film Culture. Isak Thorsen teaches film studies at the University of Copenhagen, in Denmark. He has contributed to leading international journals such as Journal of Scandinavian Cinema and Film History. Lars Gustaf Andersson, also from Sweden, is professor in film studies at Lund University. His main research interests are experimental cinema and alternative production and distribution of film. He is the other author of the book above. Olof Hedling, also from Sweden, is associate professor in film studies at Lund University. For some time, he has been working on the phenomena of European film policy, regional film funds, and regional film and television production. He is the co-editor of the collection Regional Aesthetics: Locating Swedish Media. Gunnar Iversen is professor in film studies at the Norwegian University of Science and Technology in Trondheim. He has published essays on film history, early cinema, and technology and several books including co-authorship of Nordic National Cinema. Birgir Thor Moller is an independent scholar and translator of Icelandic literature as well as film curator at the North Atlantic House in Copenhagen. He has written extensively on Icelandic cinema and is also a contributor to Transnational Cinema in a Global North: Nordic Cinema in Transition.