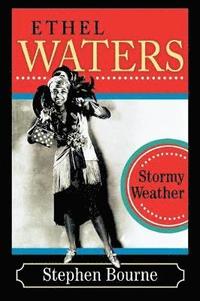 av Stephen Bourne
Häftad Engelska, 2007-03-01
459
Köp
Spara som favorit
Skickas inom 10-15 vardagar.
Fri frakt inom Sverige för privatpersoner.
Ethel Waters overcame her disadvantaged childhood to become the most famous African American actress, singer, and entertainer of her time. Her critically acclaimed move to Broadway in the mid 1920s-after having first triumphed in Black vaudeville during the Harlem Renaissance-brought the startlingly innovative and subtle character of Black Theatre into the mainstream. Ethel transformed such songs as "Dinah," "Am I Blue?," "Stormy Weather," and Irving Berlin's "Heat Wave" into classics and inspired the next generation of Black female vocalists. She gave sophistication and class to the blues and American popular song, and she influenced countless singers including Judy Garland and Frank Sinatra. Tough, uncompromising, courageous, and ambitious, Ethel Waters became one of the first African American women to be given equal billing with white stars on the Broadway stage. In 1943, the film version of her Broadway success, Cabin in the Sky, established her as Hollywood's first Black-leading lady. In such plays as Mamba's Daughters and films including The Member of the Wedding, she shattered the myth that Black women could perform only as singers. For her work in Pinky, she received an Academy Award nomination for Best Supporting Actress, the second African American to be so honored. Although she was arguably the most influential female blues and jazz singer of the 1920s and 1930s, as well as a major Black figure in 20th century theatre, cinema, radio, and television, she is now the least remembered. In Ethel Waters: Stormy Weather, Stephen Bourne documents the career of this monumental figure in American popular culture, offering new insights into the work of this forgotten legend. Supplemented by fourteen photographs, this biography leaves little doubt as to why-for decades-no other Black star was held in such high regard.
Visa hela texten

...Stephen Bourne packs a lot into his life of the African-American singer Ethel Waters....the book is a model of balance....Bourne has the makings of the country's leading biographer of African-American singers. * Jazzwise, July 2007 * This biography of singer and actress Ethel Waters traces her career, including how she became a singer, her Broadway appearances, the film version of Cabin in the Sky, other films she appeared in, and recordings. Included are a list of credits and a transcript from her interview with Woman's Hour on BBC Radio. Bourne is a contributor to Black Filmmaker magazine and is the author of other books relating to black history. * Reference and Research Book News, May 2007 *

Stephen Bourne is a regular contributor to Black Filmmaker magazine and has been interviewed in several documentaries, including Black Divas (1996) and Paul Robeson: Here I Stand (1999). He is the author of Black in the British Frame: The Black Experience in British Film and Television (2001) and Elisabeth Welch: Soft Lights and Sweet Music (Scarecrow, 2005).