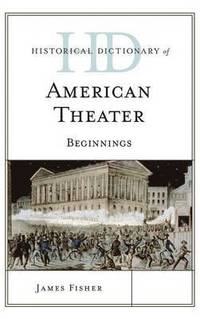 av James Fisher
Inbunden Engelska, 2015-04-15
1889
Köp
Spara som favorit
Skickas inom 10-15 vardagar.
Fri frakt inom Sverige för privatpersoner.
Finns även som
Visa alla 1 format & utgåvor
Historical Dictionary of American Theater: Beginnings covers the history of theater as well as the literature of America from 1538 to 1880. The years covered by this volume features the rise of the popular stage in American during the colonial era and the first century of the United States of America, with an emphasis on its practitioners, including such figures as Lewis Hallam, David Douglass, Mercy Otis Warren, Edwin Forrest, Charlotte Cushman, Joseph Jefferson, Ida Aldridge, Dion Boucicault, Edwin Booth, and many others. The Historical Dictionary of American Theater: Beginnings covers the history of early American Theatre through a chronology, an introductory essay, and an extensive bibliography. The dictionary section has over 1000 cross-referenced entries on actors and actresses, directors, playwrights, producers, genres, notable plays and theatres. This book is an excellent access point for students, researchers, and anyone wanting to know more about the early American Theater.
Visa hela texten

Fisher adds to this series with beneficial information on the American theater from its inception until 1880. The dictionary opens with a chronology spanning from 1538 to 1880, providing a framework for this period. Including brief biographical background along with some plot synopses, more than 1,000 short entries offer profiles of actors (Sarah Bernhardt in her debut, Edwin Booth, and Ira Aldridge), plays (Hazel Kirke, Uncle Tom's Cabin, Our American Cousin, and Fashion: Or Life In New York), and theaters (Walnut Street Theater, Ford's Theater, the McVicker's Theater, and the African Grove Theater, created for African Americans). Showman P.T. Barnum, producer David Belasco, and actor/playwright Steele MacKaye make appearances, as do historical events such as the Astor Place Opera House Riots and Abraham Lincoln's assassination. Minstrel shows and the use of blackface are a part of theater history during this time, and discussions on both are included here. Cross-references appear in bold. Some entries, such as the description of the five acts of Dion Boucicault's The Poor of New York go into more depth. An extensive bibliography is subdivided into sections on, for example, women, Native Americans, and cultural and regional studies, which is helpful for additional reading and research. VERDICT Offering a wealth of hard-to-find information in a single volume, this guide will enhance theater history collections. Students and theater buffs will relish this introduction to how theater developed in America. * Library Journal * Featuring colorful descriptions of the people, plays, and places of American theater from 1538 to 1880, this volume completes a series of historical dictionaries initiated at Scarecrow that covers modernism from 1880-1930 and contemporary American theater from 1930-2010. In those works, as in this one, Fisher strikes the right mix of scholarship and vivacious tone in his characterization of significant plays, writers, actors, and theater personnel of the early era. Brief summaries describe each play's premise and place the work in social, political, and historical context, filling in details that would have been known to audiences at the time and summarizing popular and critical reactions. Also described are important venues for performances, well-known haunts for actors and personnel, significant periodicals and anthologies documenting the scene, and topics such as barnstormers, accidents, child performers, medicine shows-even the popular genres of dog and equestrian dramas-all fleshed out in anecdote-rich entries. The work is rounded out by a detailed chronology, a bibliography balancing current academic sources with selected primary historical sources, and an engaging introductory essay. Cross-referencing enables readers to identify related entries in the series. Enthusiastically recommended to all American theater aficionados. Summing Up: Highly recommended. Lower-level undergraduates through faculty/researchers; general readers; professionals/practitioners. * CHOICE * The latest entry in Rowman & Littlefield's Historical Dictionaries of Literature and the Arts series completes a trilogy of titles about the American stage: Fisher was also the coauthor of Historical Dictionary of American Theater: Modernism (2008) and author of Historical Dictionary of American Theater: Contemporary (2011). This volume concentrates on the period from 1538 to 1880. Following the series format, it begins with a chronology, followed by an introductory essay that sets the stage for the alphabetically arrange and thoroughly cross-referenced entries that form the bulk of the book. A comprehensive bibliography completes this rich resource for the serious theater student and devotee. * Booklist *

James Fisher is professor of theatre at the University of North Carolina at Greensboro, where he served head of the Theatre Department for seven years. He has published a dozen books and directed and/or acted in 150 theatre productions. He is the 2007 recipient of the Betty Jean Jones Award for Excellence in the Teaching of American Theatre from the American Theatre and Drama Society and in 2010 he was elected to membership in the National Theatre Conference.