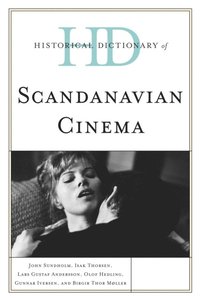 av John Sundholm, Isak Thorsen, Lars Gustaf Andersson, Olof Hedling, Gunnar Iversen
E-bok (EPUB - DRM), Engelska, 2012-09-20
1889
Ladda ned
Spara som favorit
Laddas ned direkt
Läs i vår app för iPhone och iPad
Finns även som
Visa alla 1 format & utgåvor
Although relatively small, the northern countries of Scandinavia have made a disproportionately large contribution to world cinema. Indeed, some of their films are among the best known of all times, including The Seventh Seal, Dancer in the Dark, and The Girl with the Dragon Tattoo. And Scandinavian directors are also among the best known, just to mention Ingmar Bergman and Lars von Trier. But there is much more to the cinema of Denmark, Norway, Sweden, Finland and Iceland than that, and this book shows us what they have been accomplishing over more than a century from the beginnings of cinema until the present.The Historical Dictionary of Scandinavian Cinema shows just how long and busy this history has been in the chronology, starting in 1896. The introduction then describes the situation in each one of the component countries, all of which approached and developed the field in a similar but also slightly different manner. The dictionary section, with over 400 substantial entries, looks at the situation in greater detail, with over 400 substantial entries on major actors, directors and others, significant films, various genres and themes, and subjects such as animation, ethnicity, migration and censorship. Given its contribution to world cinema it is good to finally have an encyclopedia like this which can meet the interests of the scholar and researcher but also the movie fan.
Visa hela texten