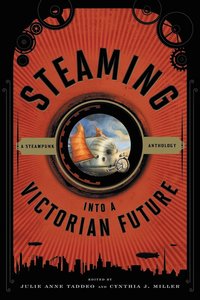 Steaming into a Victorian Future

av Julie Anne Taddeo, Cynthia J Miller
Häftad Engelska, 2014-02-06
399
Köp
Spara som favorit
Skickas inom 10-15 vardagar.
Gratis frakt inom Sverige över 159 kr för privatpersoner.
Finns även som
Visa alla 2 format & utgåvor
A popular sub-genre of fantasy and science fiction, steampunk re-imagines the Victorian age in the future, and re-works its technology, fashion, and values with a dose of anti-modernism. While often considered solely through the lens of literature, steampunk is, in fact, a complex phenomenon that also affects, transforms, and unites a wide range of disciplines, such as art, music, film, television, fashion, new media, and material culture. In Steaming into a Victorian Future: A Steampunk Anthology, Julie Anne Taddeo and Cynthia J. Miller have assembled a collection of essays that consider the social and cultural aspects of this multi-faceted genre. The essays included in this volume examine various manifestations of steampunk-both separately and in relation to each other-in order to better understand the steampunk sub-culture and its effect on-and interrelationship with-popular culture and the wider society. This volume expands and extends existing scholarship on steampunk in order to explore many previously unconsidered questions about cultural creativity, social networking, fandom, appropriation, and the creation of meaning. With a foreword by pop-culture scholar Ken Dvorak, an afterword by steampunk expert Jeff VanderMeer, and several illustrations by artist Jody Steel, Steaming into a Victorian Future offers a wide ranging look at the impact of steampunk, as well as the individuals who create, interpret, and consume it.
Visa hela texten

Steaming into a Victorian Future looks at the potential that steampunk has to be a contributor to social change through consideration of its past and present. This collection is vast in its scope, critically evaluating 'texts' from an array of genres from the past, present, and future of this literary movement and its surrounding subculture, and is as valuable as an introduction to steampunk and its possibilities as any of the fiction collections available. * Monsters and the Monstrous * [This book is] the first compilation of academic texts on the subject. . . .This is a good overview of the many aspects of the [Steampunk] movement. * Popcultureshelf.com *

Julie Anne Taddeo teaches British History at University of Maryland, College Park. She is the author of Lytton Strachey and the Search for Modern Sexual Identity (2002), co-editor of The Tube Has Spoken: Reality TV and History (2009), and editor of Catherine Cookson Country: On the Borders of Legitimacy, Fiction, and History (2012). Cynthia J. Miller is the Film Review Editor of Film & History: An Interdisciplinary Journal of Film and Television Studies. She is the editor of Too Bold for the Box Office: The Mockumentary from Big Screen to Small (Scarecrow, 2012) and coeditor of 1950s "Rocketman" TV Series and Their Fans: Cadets, Rangers, and Junior Space Men (2012) and Undead in the West: Vampires, Zombies, Mummies, and Ghosts on the Cinematic Frontier (Scarecrow, 2012).