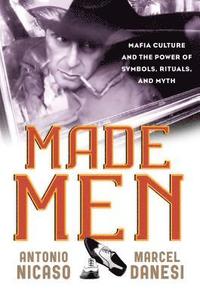 Mafia Culture and the Power of Symbols, Rituals, and Myth

av Antonio Nicaso, Marcel Danesi
Häftad Engelska, 2018-01-16
199
Köp
Spara som favorit
Finns även som
Visa alla 2 format & utgåvor
The novel The Godfather (1969) and the movie of the same name (1972) entrenched the myth of the Mafiosi as valiant knights, men of honor, and defenders of the traditional concept of family. As a result of this movie and other popular portrayals, the image of mobsters as "men of honor and tradition" has become iconic throughout America. Yet the truth of the matter belies this more noble image. The Mafia is a ruthless organization. Their concept of family is a twisted one. But viewed through the lens of popular culture, it is often difficult to separate the fiction from the reality. Made Men demystifies this image by dismantling the code of honor that Mafiosi live by, including its attendant symbols, rituals, and the lifestyle that it demands. Since the end of World War II, the Mafia in Italy and America has undergone major changes, which are charted by the authors through the present day. Nicaso and Danesi also consider all kinds of related organizations, not only the Italian ones, including the Yakuza, the Triads, and the Russian Mafia. The authors look at organized criminal culture in general, attempting to explain why its symbols, rituals, and practices continue to draw people in, both as literal members, or as consumers of the pop culture that glorifies them. This story traces and decodes the origins, history and success of the mafia in the U.S., bringing a better, and more accurate understanding of this ultimately brutal, violent, and corrupting "family business." It is a story that has rarely been told in this way, but which is believed, nonetheless, important to tell.
Visa hela texten

Journalist Nicaso (Middlebury College) and anthropologist Danesi (Toronto) demystify the Mafia. Instead of perpetuating the cinematic image of Mafia members as misunderstood patriarchs, the authors spotlight the discrepancies between popular culture and reality. More importantly, they shatter the myth that all Italian mob families operate alike, as well as the myth that organized street gangs, in general, are one-dimensional entities, making this book a valuable addition to the scholarship on organized crime. Nicaso and Danesi clearly show that what keeps these organizations' "thugness" disguised as honorable criminality are the cultural markers and rituals that become the social glue for members. Included in these markers and rituals are distinct clothing, vocabulary, nicknames, and initiations intended to provide a veneer of exclusivity to members. Nicaso and Danesi drive home the point that no gangs, including the Mafia, can be classified together in a homogenous lump. Both anthropological and sociological, the book is exhaustively researched yet lightly written, assumedly to reach a wider audience, particularly at the less initiated undergraduate level. Summing Up: Recommended. All levels/libraries. * CHOICE * If you are interested in criminal organizations, particularly the Mafia, this book is a must read. Nicaso and Danesi explain in elaborate detail how the use of rituals binds members and allows criminal organizations to persist through time despite the best efforts of law enforcement. -- Howard Abadinsky, Ph.D., St. John's University Just when you thought there was nothing new to say about the Mafia comes Antonio Nicaso's and Marcel Danesi's Made Men. The authors debunk many of the long-help perceptions of the Mafia myth using a novel approach to deconstruct the Mafia mystique. Made Men is chockfull of insightful observations that help to show that the symbols, rituals, and myths that organized crime groups such as the Mafia (as well as the Yakuza, Triads and Russian mobsters) use to ensure their continuity are little more than self-serving justifications for their criminal and amoral actions. -- Mitchel P. Roth

Antonio Nicaso, is an award-winning journalist, a bestselling author and an internationally recognized expert on organized crime. He is a regular consultant to governments and law-enforcement agencies around the world and a lecturer at several universities. Nicaso teaches in the postgraduate courses on history of organized crime at Middlebury College (Vermont) and he is the co-director of the Centre of Forensic Semiotics at Victoria College (University of Toronto). He sits on International Advisory Council of The Italian Institute of Stategic Studies "Nicolo Machiavelli. Marcel Danesi is professor of anthropology at the University of Toronto. He is known for his work in language, communications, and semiotics; being Director of the Program in semiotics and communication theory. He has also held positions at Rutgers University, University of Rome "La Sapienza", the Catholic University of Milan, and the University of Lugano. Among his most significant books are Cool: The Signs and Meanings of Adolescence and Popular Culture: An Introduction (2011).