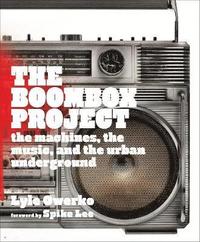 "The Machines, the Music, and the Urban Underground"

On the heels of the graffiti renaissance comes a vibrant look at an old-school icon that figured prominently in the hip-hop, rock & roll, and punk movements of the 1970s and 80s. The Boombox Project features contemporary fine art portraits of an array of vintage boomboxes, as well as scores of documentary photographs of the people who brought the boombox movement to life back in the day. The book is more than just a collection of images, though; it's also an oral history of the early days of hip-hop, featuring memories from Fab 5 Freddy, Bob Gruen, Rosie Perez, Kool Moe Dee, LL Cool J, Lisa Lisa, DJ Spooky, and Adam Yauch of the Beastie Boys, among others, on the role this once ubiquitous machine played.Part pop cultural history and part "gadget porn," this lively and highly stylish volume is one of the cool books of the season.Praise for The Boombox Project:"Photographer Lyle Owerko tells the whole story with crisp still lifes and an oral history of an era when graffiti and antigentrification ruled." --Playboy, October 2010
Visa hela texten

Lyle Owerko is a New York-based filmmaker and photographer whose clients have included the Sundance Channel and MTV. He has also directed music videos for artists such as Rufus Wainwright and American Hi-Fi. Owerko shot the cover photograph for the September 11, 2001 issue of Time, which was ranked as one of the 40 most important magazine covers in the past 40 years by the American Society of Magazine Editors.