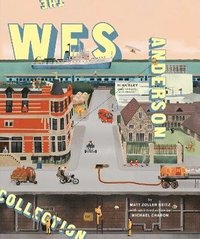 Köp
Spara som favorit
Kan levereras innan julafton!
Finns även som
Visa alla 1 format & utgåvor
Wes Anderson is the most influential comedic voice from the past two decades of American cinema. A true auteur, his intimate involvement in each of his films; Bottle Rocket, Rushmore, The Royal Tenenbaums, The Life Aquatic with Steve Zissou, The Darjeeling Limited, Fantastic Mr. Fox and Moonrise Kingdom, includes scriptwriting, set design, soundtrack selections and unit photography. Anderson's visual artistry, inimitable tone and idiosyncratic characterisations make each of his films instantly recognisable as "Andersonian."The Wes Anderson Collection is the first in-depth overview of Anderson's work, guiding readers through the life and career of one of the most talked-about contemporary filmmakers. Previously unpublished photos, artwork and ephemera complement a book-length interview between Anderson and award-winning film critic Matt Zoller Seitz, who offers insights into Anderson's creative process, influences, and the production of his films. These elements come together in a meticulously designed object in the spirit of Anderson's movies: melancholy and playful, wise and childish-and thoroughly original.
Visa hela texten

"A magical tour of Wes Anderson's filmography."--C magazine "Each page of this book--filled with conversations, photographs and artwork surrounding each film--showcases Anderson's pop-culture inspirations from Hitchcock and Star Wars to Jacques Cousteau and the French New Wave. Better than most of their kind, the talks reveal a candidness and honesty between critic and director, allowing Seitz to dig around Anderson's vault and share his discoveries."--FILTER "It's smart, informative, and looks beautiful. In other words, it's the perfect gift."--Complex magazine "Reading the book, you feel as if you're disappearing into the miniature world of Anderson's movies, like you're playing around in the files and fastidiously kept dossiers assembled for each project. In this way, the book mimics the work."--Complex.com "Your coffee table wants--no, scratch that--needs this book . . . Packed with 400 images of everything from behind-the-scenes set shots to makeup inspiration to hand-drawn storyboards, the massive tome is pure eye candy. But in addition to the visuals, Seitz also dives deep into each and every Anderson film."--NYLON "In The Wes Anderson Collection, Seitz expands a series of video essays on Anderson's influences, illuminating as much of Anderson's process as possible in a massive, beautifully rendered volume. Although it looks (and sometimes reads) like a coffee table book, The Wes Anderson Collection brings together style and substance to provide a loving homage to Anderson's films and moviemaking in general."--The A.V. Club "The Wes Anderson Collection comes as close as a book can to reading like a Wes Anderson film. The design is meticulously crafted, with gorgeous full-page photos and touches like a still representation of Rushmore's opening montage."--The A.V. Club

Matt Zoller Seitz, a Pulitzer Prize finalist for criticism, is a leading expert on Wes Anderson's life and work. Seitz wrote some of the earliest published articles on Anderson and the Wilson brothers and has written for The New York Times, New York Press and Film Forum. Seitz currently writes for New York Magazine and is a founder of and contributor to IndieWire's Press Play blog. Wes Anderson was born in Houston, Texas and studied philosophy at the University of Texas, where he met future collaborator Owen Wilson. Anderson resides mainly in Paris.