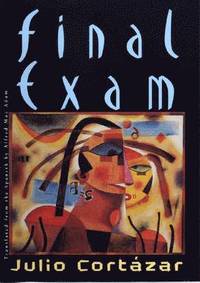 av Julio Cortazar
Häftad Engelska, 2008-08-08
163
Köp
Spara som favorit
Written in 1950 (just before the fall of Peron's government), Final Exam is Julio Cortazar's bitter and melancholy allegorical farewell to an Argentina from which he would soon be permanently self-exiled. In a surreal Buenos Aires, a strange fog has enveloped the city to everyone's bewilderment. Juan and Clara, two students at a college called "The House," meet up with their friends, and, instead of preparing for their final exam, wander the city, encountering strange happenings and pondering life in cafes. All the while, they are trailed by the mysterious Abel. With its daring typography, shifts in rhythm, as well as wildly veering directions of thought and speech, Final Exam breaks new ground in the territory of stream-of-consciousness writing. Darkly funny-and riddled with unresolved ambiguities-Final Exam is one of Cortazar's best works. Author of Hopscotch and Blow-Up, Julio Cortazar's (1914-1984) was a novelist, poet, essayist, and short-story writer. He was born in Brussels, lived in Argentina, but moved permanently to France in 1951, where he became one of the twentieth century's major experimental writers.
Visa hela texten

"The stream-of-consciousness narrative helps to make this one of Cortazar's key works." -- Multicultural Review "Final Exam is an intriguing book for any reader with avant-garde sympathies, or for anyone who-like most who know him-loves Julio." -- San Francisco Chronicle "The publication of Final Exam is a literary event." -- The Seattle Times "[A] major undiscovered work...a novel about Buenos Aires which one night turns into a Kafkaesque nightmare." -- Harry Morales - Worldview "Cortazar spoke of something more than novelty or progress--he spoke of the radically new and joyful nature of every instant, of the body, the memory and the imagination of men and women." -- Carlos Fuentes "Anyone who doesn't read Cortazar is doomed." -- Pablo Neruda

Julio Cortazar (1914-1984), Argentine novelist, poet, essayist, and short-story writer, was born in Brussels, and moved permanently to France in 1951. Cortazar is now recognized as one of the century's major experimental writers, reflecting the influence of French surrealism, psychoanalysis, and his love of both photography and jazz, along with his strong commitment to revolutionary Latin American politics. Professor MacAdam's area of specialization is twentieth-century Latin-American narrative, a subject on which he has published three books and numerous articles. He is also a translator of Latin-American fiction and has translated novels by Julio Cortazar, Reinaldo Arenas, Alejo Carpentier, Jose Donoso, Carlos Fuentes, Mario Vargas Llosa, Juan Carlos Onetti, and Osvaldo Soriano. From 1984 to 2004, MacAdam was the editor of Review: Latin American Literature and Arts, a publication of the Americas Society. This biannual magazine presents work by Latin-American writers not yet known to English-speaking audiences as well as unknown texts by already established writers.