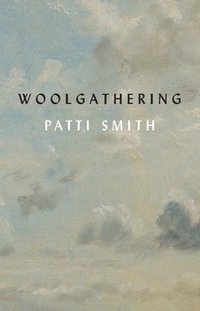 av Patti Smith
Häftad Engelska, 2021-11-03
163
Köp
Spara som favorit
Finns även som
Visa alla 3 format & utgåvor
Patti Smith's celebrated Woolgathering is now being released in an expanded paperback, with a radiant new afterword, written in the time of the pandemic and reflecting on current times, as well as new photographs by the author.
The National Book Award-winner Patti Smith updates her treasure box of a childhood memoir about "clear unspeakable joy" and "just the wish to know."

A great book about becoming an artist, Woolgathering tells of a youngster finding herself as she learns the noble vocation of woolgathering, "a worthy calling that seemed a good job for me." She discovers?often at night, often in nature?the pleasures of rescuing "a fleeting thought." Deeply moving, Woolgathering calls up our own memories, as the child "glimpses and gleans, piecing together a crazy quilt of truths." Smith introduces us to her tribe, "a race of cloud dwellers," and to the fierce, vital pleasures of stargazing and wandering. Her new Afterword, penned during a time of quarantine and shutdowns, opens new horizons in "the scarcely charted landscape of memory governed by clouds."