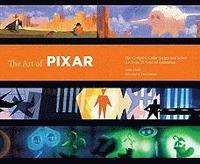 av Amid Amidi
Inbunden Engelska, 2011-11-01
289
Köp
Spara som favorit
Pixar is 25 years old in 2011. This gorgeous, expansive book features the complete colour scripts and a selection of the best of the art from the twelve films to date: "Toy Story", "A Bug's Life", "Toy Story 2", "Monsters Inc.", "Finding Nemo", "The Incredibles", "Cars", "Ratatouille", "WALL E", "Up", "Toy Story 3" and "Cars 2". The full-colour scripts for each film, prominently featured, constitute a big selling point for the core animation audience. Geared toward animation fans, this text is minimal and the art is extensive and stunning. Text will just be a foreword by Pixar founder John Lasseter, with an introduction by Amid Amidi. It's all about the art!
Visa hela texten

"...this book is a must have.." - Pixar Talk "offers a fun behind-the-scenes look at some of the most beloved Pixar films" -The Hollywood Reporter "A must-have for animation and illustration fans. Author Amid Amidi of Cartoon Brew has a solid track record, and even for their lesser films, these Pixar Art Of books, usually devoted to a single film, are always brimming with wonderful art. What sets this particular book apart is that it spans the studio's entire catalog and reproduces each film's colour script - a series of lush, colourful preliminary paintings that are to the emotion of an animated film what storyboards are to the action." -Drawn "Both insightful and inspiring, The Art of Pixar would make an excellent addition to the library of painters, animators and storytellers." -Forces of Geek "There's nothing quite like watching a Pixar film in a theater alongside hundreds of fellow moviegoers. But taking your time with a book like The Art of Pixar is an unexpected and essential adjunct to the experience. It's a path through the minds of the artists, and as a result, a look inside at the characters, scenes, sets, and environments that shape the many movies that together form Pixar's enviable collection" -CNET "Pixar and Chronicle have prepared a jaw-dropping collection of colorscripts and other pieces from its productions in a brand new coffee-table book...that will look great in anyone's collection." -Upcoming Pixar blog