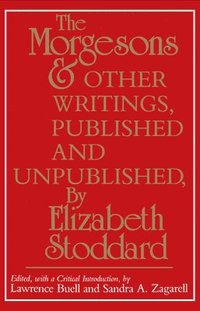 'The Morgesons' and Other Writings, Published and Unpublished

av Elizabeth Stoddard, Lawrence Buell, Sandra A Zagarell
Häftad Engelska, 1984-06-01
319
Köp
Spara som favorit
Skickas inom 5-8 vardagar.
Fri frakt inom Sverige för privatpersoner.
"Stoddard was, next to Melville and Hawthorne, the most strikingly original voice in the mid-nineteenth-century American novel, a voice . . . that ought to gain a more sympathetic and perceptive hearing in our time than in her own."-from the Introduction The centerpiece of this volume is The Morgesons (1862), one of the few outstanding feminist bildungsromanae of that century. Additional selections include arresting short stories and provocative journalistic essays/reviews, plus a number of letters and manuscript journals that have never before been published. The texts are fully edited and documented.
Visa hela texten

''A sly, subtle, shrewd observer of the ethos of her native New England village, Stoddard was a surprisingly 'modern' chronicler of the women of will and individuality seeking personal fulfillment against the crushing constraints of tradition. . . . She is well worth rescuing from oblivion and installing as a familiar presence in our literary culture."-Publishers Weekly "The Morgesons is a classic of premodern literature. Its rediscovery will change our preconceptions of women's literature in the nineteenth century."-Cathy N. Davidson, Duke University

Bloggat om 'The Morgesons' and Other Writings, Publi...

Elizabeth Stoddard (1823-1902) is most widely known today as the author of The Morgesons (1862), her first of three novels. Her two other novels are Two Men (1865) and Temple House (1867). Stoddard was also a prolific writer of short stories, children's tales, poems, essays, travel writing, and journalism pieces. Lawrence Buell is the Powell M. Cabot Professor of American Literature at Harvard University and the author of many books, including Emerson (2003) and The Future of Environmental Criticism: Environmental Crisis and Literary Imagination (2005), Sandra A. Zagarell is Donald R. Longman Professor of English at Oberlin College. Essays of hers have appeared widely in edited volumes and journals, and she is the senior editor of The Heath Anthology of American Literature, 4th edition.