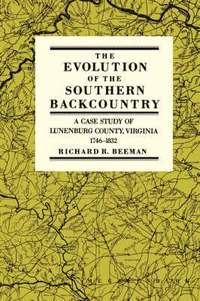 The Evolution of the Southern Back Country

av Richard R Beeman
Häftad Engelska, 1989-05-01
319
Köp
Spara som favorit
Skickas inom 5-8 vardagar.
Fri frakt inom Sverige för privatpersoner.
The Evolution of the Southern Backcountry is the story of an expanding frontier. Richard Beeman offers a lively and well-written account of the creation of bonds of community among the farmers who settled Lunenburg Country, far to the south and west of Virginia's center of political and economic activity. Beeman's view of the nature of community provides an important dynamic model of the transmission of culture from older, more settled regions of Virginia to the southern frontier. He describes how the southern frontier was influenced by those staples of American historical development: opportunity, mobility, democracy, and ethnic pluralism; and he shows how the county evolved socially, culturally, and economically to become distinctly southern.
Visa hela texten

"One of the best local studies on any place in eighteenth-century American, it is a work of unusual importance."-Jack P. Greene, Johns Hopkins University "What makes Beeman's study of early Lunenburg especially noteworthy is the way he analyzes the failure of the rich man's culture to flourish in the poor man's country once it had been transplanted there... Beeman offers a valuable insight into the nature-and the limits-of cultural authority in colonial Virginia."-Reviews in American History "Beeman's fascinating study ... is unusually comprehensive, skillfully weaving complex economic, political, and religious matters with a broad concern for social and community change, and it is contextual, employing the case study to address the wider issue of the formation of a southern regional identity. Beeman's success at combining chronicle and process will make his work a model for future studies of this kind."-Journal of Southern History "This book is the product of an impressive amount of primary sources and composes an excellent microcosm study of a southern country progressing through metamorphic stages from frontier to conservative agrarian community... A substantial contribution to an understanding of the role of the grassroots community in the making of the social and cultural profile of the greater South."-Southern Quarterly "With sensitivity to the complexities of the process, the author has traced an important cultural transformation in Virginia and in the South generally."-Thad W. Tate, Institute of Early American History and Culture

Bloggat om The Evolution of the Southern Back Country