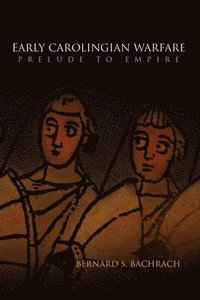 av Bernard S Bachrach
Häftad Engelska, 2011-03-08
299
Köp
Spara som favorit
Skickas inom 10-15 vardagar.
Fri frakt inom Sverige för privatpersoner.
Beställ senast imorgon kl 17:30 för leverans innan jul!
Without the complex military machine that his forebears had built up over the course of the eighth century, it would have been impossible for Charlemagne to revive the Roman empire in the West. Early Carolingian Warfare is the first book-length study of how the Frankish dynasty, beginning with Pippin II, established its power and cultivated its military expertise in order to reestablish the regnum Francorum, a geographical area of the late Roman period that includes much of present-day France and western Germany. Bernard Bachrach has thoroughly examined contemporary sources, including court chronicles, military handbooks, and late Roman histories and manuals, to establish how the early Carolingians used their legacy of political and military techniques and strategies forged in imperial Rome to regain control in the West. Pippin II and his successors were not diverted by opportunities for financial enrichment in the short term through raids and campaigns outside of the regnum Francorum; they focused on conquest with sagacious sensibilities, preferring bloodless diplomatic solutions to unnecessarily destructive warfare, and disdained military glory for its own sake. But when they had to deploy their military forces, their operations were brutal and efficient. Their training was exceptionally well developed, and their techniques included hand-to-hand combat, regimented troop movements, fighting on horseback with specialized mounted soldiers, and the execution of lengthy sieges employing artillery. In order to sustain their long-term strategy, the early Carolingians relied on a late Roman model whereby soldiers were recruited from among the militarized population who were required by law to serve outside their immediate communities. The ability to mass and train large armies from among farmers and urban-dwellers gave the Carolingians the necessary power to lay siege to the old Roman fortress cities that dominated the military topography of the West. Bachrach includes fresh accounts of Charles Martel's defeat of the Muslims at Poitiers in 732, and Pippin's successful siege of Bourges in 762, demonstrating that in the matter of warfare there never was a western European Dark Age that ultimately was enlightened by some later Renaissance. The early Carolingians built upon surviving military institutions, adopted late antique technology, and effectively utilized their classical intellectual inheritance to prepare the way militarily for Charlemagne's empire.
Visa hela texten

"An excellent and valuable book. It is hard to argue with Bachrach's most important point: the early Carolingian armies had to have been well organized, trained, supplied, and led for the eighth-century Carolingian rulers to have achieved what they did. In demonstrating that point Bachrach has highlighted the complex military, political, and social structure of early Carolingian society itself. He has thus presented us with a history of the early Carolingian military, not only for its own sake, but also to show us that understanding it is a crucial part of understanding the Carolingian world as a whole."-Speculum "The evidence supporting Bachrach's conclusions is every bit as overwhelming as Carolingian forces were."-American Historical Review

Bernard S. Bachrach is Professor of History at the University of Minnesota. Among his recent books are Fulk Nerra, the Neo-Roman Consul, 987-1040; Merovingian Military Organization, 481-751; and State-Building in Medieval France: Studies in Early Angevin History.