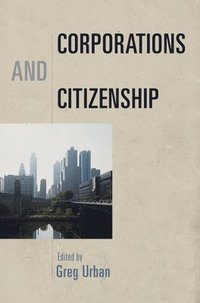 av Greg Urban
Inbunden Engelska, 2014-05-26
549
Köp
Spara som favorit
Finns även som
Visa alla 1 format & utgåvor
President Theodore Roosevelt once proclaimed, "Great corporations exist only because they are created and safeguarded by our institutions, and it is therefore our right and duty to see that they work in harmony with those institutions." But while corporations are ostensibly regulated by citizens through their governments, the firms in turn regulate many aspects of social and political life for individuals beyond their own employees and the communities that support them. Corporations are endowed with many of the same rights as citizens, such as freedom of speech, but are not themselves typically constituted around ideals of national belonging and democracy. In the wake of the global financial collapse of 2008, the question of what relationship corporations should have to governing institutions has only increased in urgency. As a democratically sanctioned social institution, should a corporation operate primarily toward profit accumulation or should its proper goal be to provision society with needed goods and services? Corporations and Citizenship addresses the role of modern for-profit corporations as a distinctive kind of social formation within democratic national states. Scholars of legal studies, business ethics, politics, history, and anthropology bring their perspectives to bear on particular case studies, such as Enron and Wall Street, as well as broader issues of belonging, social responsibility, for-profit higher education, and regulation. Together, these essays establish a complex and detailed understanding of the ways corporations contribute positively to human well-being as well as the dangers that they pose. Contributors: Joel Bakan, Jean Comaroff, John Comaroff, Cynthia Estlund, Louis Galambos, Rosalie Genova, Peter Gourevitch, Karen Ho, Nien-he Hsieh, Walter Licht, Jonathan R. Macey, Hirokazu Miyazaki, Lynn Sharp Paine, Katharina Pistor, Amy J. Sepinwall, Jeffery Smith, Jeffrey L. Sturchio, Greg Urban.
Visa hela texten

"A serious engagement with the mutual implications of citizenship and corporations is overdue. This book's main gambit is theoretically and critically suggestive in ways that reach across the human sciences."-Carol Greenhouse, Princeton University

Greg Urban is Arthur Hobson Quinn Professor of Anthropology at the University of Pennsylvania and author of several books, including Metaculture: How Culture Moves Through the World.