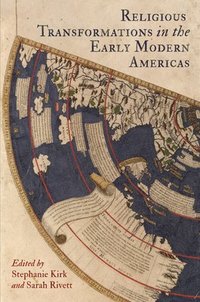 av Stephanie Kirk, Sarah Rivett
Inbunden Engelska, 2014-11-06
479
Köp
Spara som favorit
Finns även som
Visa alla 1 format & utgåvor
Christianity took root in the Americas during the early modern period when a historically unprecedented migration brought European clergy, religious seekers, and explorers to the New World. Protestant and Catholic settlers undertook the arduous journey for a variety of motivations. Some fled corrupt theocracies and sought to reclaim ancient principles and Christian ideals in a remote unsettled territory. Others intended to glorify their home nations and churches by bringing new lands and subjects under the rule of their kings. Many imagined the indigenous peoples they encountered as "savages" awaiting the salvific force of Christ. Whether by overtly challenging European religious authority and traditions or by adapting to unforeseen hardship and resistance, these envoys reshaped faith, liturgy, and ecclesiology and fundamentally transformed the practice and theology of Christianity. Religious Transformations in the Early Modern Americas explores the impact of colonial encounters in the Atlantic world on the history of Christianity. Essays from across disciplines examine religious history from a spatial perspective, tracing geographical movements and population dispersals as they were shaped by the millennial designs and evangelizing impulses of European empires. At the same time, religion provides a provocative lens through which to view patterns of social restriction, exclusion, and tension, as well as those of acculturation, accommodation, and resistance in a comparative colonial context. Through nuanced attention to the particularities of faith, especially Anglo-Protestant settlements in North America and the Ibero-Catholic missions in Latin America, Religious Transformations in the Early Modern Americas illuminates the complexity and variety of the colonial world as it transformed a range of Christian beliefs. Contributors: Ralph Bauer, David A. Boruchoff, Matt Cohen, Sir John Elliot, Carmen Fernandez-Salvador, Junia Ferreira Furtado, Sandra M. Gustafson, David D. Hall, Stephanie Kirk, Asuncion Lavrin, Sarah Rivett, Teresa Toulouse.
Visa hela texten

"This nuanced and compelling volume charts religion's invention, reinvention, and interventions across the geographies of the Americas in early modernity. Editors Kirk and Rivett are to be highly commended for their clear voice, light touch, and firm hand in this perfect assembly of essays representing interdisciplinary expertise, spatial reach, and thoughtful, carefully moderated comparative analysis. A model set of important studies: fascinating, articulate, smart, and, I dare say, transformative of the ways we think about early modern American histories, religions, populations, and practices."-Sally M. Promey, Yale University "How was Christianity not only transformed in the New World but transformed by it? This superb collection of essays shows that the answers to this question for Iberian Catholicism and English Protestantism are neither identical, nor as opposed, as traditionally conceived. Stephanie Kirk's and Sarah Rivetts Religious Transformations in the Early Modern Americas is particularly commendable for giving equal weight to both of these religious traditions, setting a new standard for edited collections that seek to represent the hemispheric Americas. As readers accompany an outstanding interdisciplinary group of scholars through the main sites of religious transformation in the American colonies-from demonology and martyrdom to piety and missionization-they will be challenged to think anew about North-South comparisons and the relationship between religion and modernity in the early Americas."-Lisa Voigt, Ohio State University