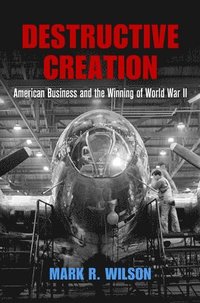 American Business and the Winning of World War II

av Mark R Wilson
Inbunden Engelska, 2016-08-03
441
Köp
Spara som favorit
Skickas inom 7-10 vardagar.
Gratis frakt inom Sverige över 159 kr för privatpersoner.
Finns även som
Visa alla 2 format & utgåvor
During World War II, the United States helped vanquish the Axis powers by converting its enormous economic capacities into military might. Producing nearly two-thirds of all the munitions used by Allied forces, American industry became what President Franklin D. Roosevelt called "the arsenal of democracy." Crucial in this effort were business leaders. Some of these captains of industry went to Washington to coordinate the mobilization, while others led their companies to churn out weapons. In this way, the private sector won the war-or so the story goes. Based on new research in business and military archives, Destructive Creation shows that the enormous mobilization effort relied not only on the capacities of private companies but also on massive public investment and robust government regulation. This public-private partnership involved plenty of government-business cooperation, but it also generated antagonism in the American business community that had lasting repercussions for American politics. Many business leaders, still engaged in political battles against the New Deal, regarded the wartime government as an overreaching regulator and a threatening rival. In response, they mounted an aggressive campaign that touted the achievements of for-profit firms while dismissing the value of public-sector contributions. This probusiness story about mobilization was a political success, not just during the war, but afterward, as it shaped reconversion policy and the transformation of the American military-industrial complex. Offering a groundbreaking account of the inner workings of the "arsenal of democracy," Destructive Creation also suggests how the struggle to define its heroes and villains has continued to shape economic and political development to the present day.
Visa hela texten

"A masterful history of the World War II mobilization effort. Deeply researched, this book synthesizes, military, business, and political history in a well-written account of a war that is often oversimplified. Wilson's account should inform future histories of World War II-and perhaps reignite debates over the relative merits of public versus private enterprise."-Journal of Military History "Mark R. Wilson has made an outstanding contribution to the historical debate about U.S. industrial mobilization in World War II. Destructive Creation focuses on the substantial but largely ignored public sector contribution to the industrial war effort and argues that overemphasizing the role of the private sector and the relative neglect of the public sector in the historical literature has distorted our understanding of that wartime production miracle."-Journal of American History "Destructive Creation is essential reading for economic historians interested in WWII and for learning the lessons of history most relevant to ongoing debates over the military-industrial complex of the twenty-first century."-Journal of Economic History "Destructive Creation should be mandatory reading for historians of World War II, and for military historians in general. . . . Its compelling, well-substantiated arguments about the origins (and chronology) of American conservatism will be of interest to political historians. Scholars of business and/or technology, meanwhile, will have much to learn from Wilson's nuanced analysis of the unexpectedly fraught relationship between the public agencies and private firms that produced America's 'arsenal of democracy.' This is also a timely book, relevant to current debates about the privatization of military operations, security, and policing."-American Historical Review "An outstanding reinterpretation of the role of business in the war effort, this volume is a must read for anyone who wants to understand World War II and the world of private contractors that has come to define our modern military."-Meg Jacobs, author of Pocketbook Politics: Economic Citizenship in Twentieth-Century America "Destructive Creation is a probing account of the World War II mobilization effort that sheds new light on the sources of big business hostility to government regulation. As Mark Wilson demonstrates in absorbing detail, it was the very success of the wartime state that generated such a furious business backlash. This is revisionist history in the most provocative and illuminating sense."-Nelson Lichtenstein, University of California, Santa Barbara "It is an extraordinarily valuable and careful monograph that explains what works, and why we believe untrue stories about effective mobilization for war, and other crises."-Business History Review "Wilson's book is hard hitting, but balanced, detailed without being pedantic, and eminently stimulating."-Defense Acquisition Research Journal "Destructive Creation is a truly important, impressive, and extraordinary history of the mobilization of the United States' economy during the Second World War, with a number of fascinating implications for our understanding of the interactions between business, politics, and American society. Mark R. Wilson makes a compelling case for placing the relationship between the military and business at the center of how we think about modern American history."-Jason Scott Smith, University of New Mexico

Mark R. Wilson is Professor of History at the University of North Carolina at Charlotte. He is author of The Business of Civil War: Military Mobilization and the State, 1861-1865.