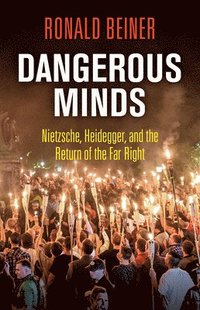 Nietzsche, Heidegger, and the Return of the Far Right

av Ronald Beiner
Inbunden Engelska, 2018-04-05
263
Köp
Spara som favorit
Finns även som
Visa alla 1 format & utgåvor
Following the fall of the Berlin Wall and demise of the Soviet Union, prominent Western thinkers began to suggest that liberal democracy had triumphed decisively on the world stage. Having banished fascism in World War II, liberalism had now buried communism, and the result would be an end of major ideological conflicts, as liberal norms and institutions spread to every corner of the globe. With the Brexit vote in Great Britain, the resurgence of right-wing populist parties across the European continent, and the surprising ascent of Donald Trump to the American presidency, such hopes have begun to seem hopelessly naive. The far right is back, and serious rethinking is in order. In Dangerous Minds, Ronald Beiner traces the deepest philosophical roots of such right-wing ideologues as Richard Spencer, Aleksandr Dugin, and Steve Bannon to the writings of Nietzsche and Heidegger-and specifically to the aspects of their thought that express revulsion for the liberal-democratic view of life. Beiner contends that Nietzsche's hatred and critique of bourgeois, egalitarian societies has engendered new disciples on the populist right who threaten to overturn the modern liberal consensus. Heidegger, no less than Nietzsche, thoroughly rejected the moral and political values that arose during the Enlightenment and came to power in the wake of the French Revolution. Understanding Heideggerian dissatisfaction with modernity, and how it functions as a philosophical magnet for those most profoundly alienated from the reigning liberal-democratic order, Beiner argues, will give us insight into the recent and unexpected return of the far right. Beiner does not deny that Nietzsche and Heidegger are important thinkers; nor does he seek to expel them from the history of philosophy. But he does advocate that we rigorously engage with their influential thought in light of current events-and he suggests that we place their severe critique of modern liberal ideals at the center of this engagement.
Visa hela texten

In this erudite, insightful, and short monograph, Ronald Beiner takes aim at (often French-inspired) intellectuals who believe that Nietzsche and Heidegger can and should be deployed to advance a progressive or radically democratic politics Beiner believes that the two philosophers often serve as better resources for fascists. Dangerous Minds mounts its critique in the light of the recent rise of far-right movements, which often rely on Nietzsche and Heidegger for philosophic ballast. * <i>Contemporary Political Theory</i> * Dangerous Minds is a provocation: a forceful reminder that while Nietzsche and Heidegger are great thinkers, 'they are not innocent.' In that, Beiner succeeds splendidly. * <i>Review of Metaphysics</i> * A great book. If it proves anything, it's that ideas have consequences, often profound and dangerous ones. One perhaps unintended benefit of the emergence of the New Right is that it forces readers of Nietzsche and Heidegger to see them for what they are-apostles of a resurgent fascism. For those accustomed to reading these thinkers as prophets of individual liberation and moral self-realization, Ronald Beiner has a clear message: think again. * Steven Smith, Yale University * Ronald Beiner's Dangerous Minds is a staggeringly impressive and deeply needed book that traces the philosophical foundations of contemporary reactionary politics to the philosophical works of Nietzsche and Heidegger. Beiner avoids both shrillness while confronting present day opponents of liberal democracy and shallowness while excavating the work of their intellectual heroes. Indeed, he treats authors such as Julius Evola and Aleksandr Dugin with deathly seriousness, and he soberly-and with exquisite philosophical care-delves into the fundamental core of Nietzsche's and Heidegger's writings. Dangerous Minds is elegantly structured and beautifully written. It will be widely read and debated in this frightening age of fascist resurgence. * John P. McCormick, University of Chicago *