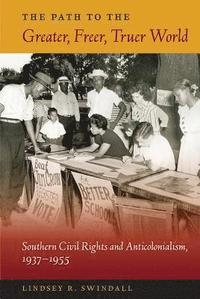 The Path to the Greater, Freer, Truer World

av Lindsey R Swindall
Häftad Engelska, 2019-02-28
309
Köp
Spara som favorit
Skickas inom 10-15 vardagar.
Fri frakt inom Sverige för privatpersoner.
Finns även som
Visa alla 1 format & utgåvor
The Southern Negro Youth Congress and the Council on African Affairs were two organizations created as part of the early civil rights efforts to address race and labor issues during the Great Depression. They fought within a leftist, Pan-African framework against disenfranchisement, segregation, labor exploitation, and colonialism. By situating the development of the SNYC and the Council on African Affairs within the scope of the long civil rights movement, Lindsey Swindall reveals how these groups conceptualized the U.S. South as being central to their vision of a global African diaspora. Both organizations illustrate well the progressive collaborations that maintained an international awareness during World War II. Cleavages from anti-radical repression in the postwar years are also evident in the dismantling of these groups when they became casualties of the early Cold War. By highlighting the cooperation that occurred between progressive activists from the Popular Front to the 1960s, Swindall adds to our understanding of the intergenerational nature of civil rights and anticolonial organizing. A volume in the series New Perspectives on the History of the South, edited by John David Smith.
Visa hela texten

"A useful, well-researched reminder that the U.S. struggle for racial civic inclusion domestically and anticolonial fairness internationally was more ideologically and tactically diverse than popularly portrayed." -Choice "Adds much-needed texture to the growing historiography on African American protest politics and the global understandings of racism during the 1930s and 1940s." -American Historical Review "Those wishing to explore the CAA or the SNYC or the connections between the U.S. South and the black freedom and anticolonial struggles will be glad that Swindall has helped enrich that understanding." -Journal of American History "Invites scholars and students of social movements to consider the global intersectionality of two under-examined equal rights organizations of the 20th century, placing the scholarship on the southern civil rights campaigns in conversation with works on the anticolonial struggles in the global South." -Journal of African American History "Provides a detailed examination of the Southern Negro Youth Congress (SNYC) and the Council on African Affairs (CAA) to situate these black-labor-left coalitions as part of the long civil rights movement." -Journal for the Study of Radicalism "Joins a growing number of monographs that complicate our understanding of how the anticolonial struggle outside the United States influenced American civil rights activists. . . . Illuminates the civil rights movement's persistence despite the postwar Red Scare." -North Carolina Historical Review

Bloggat om The Path to the Greater, Freer, Truer World

Lindsey R. Swindall, teaching assistant professor at Stevens Institute of Technology, is the author of The Politics of Paul Robeson's Othello and Paul Robeson: A Life of Activism and Art.