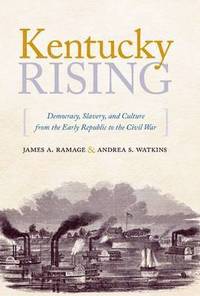 Democracy, Slavery, and Culture from the Early Republic to the Civil War

av James A Ramage, Andrea S Watkins
Inbunden Engelska, 2011-11-04
709
Köp
Spara som favorit
Finns även som
Visa alla 2 format & utgåvor
Kentucky's first settlers brought with them a dedication to democracy and a sense of limitless hope about the future. Determined to participate in world progress in science, education, and manufacturing, Kentuckians wanted to make the United States a great nation. They strongly supported the War of 1812, and Kentucky emerged as a model of patriotism and military spirit. Kentucky Rising: Democracy, Slavery, and Culture from the Early Republic to the Civil War offers a new synthesis of the sixty years before the Civil War. James A. Ramage and Andrea S. Watkins explore this crucial but often overlooked period, finding that the early years of statehood were an era of great optimism and progress. Drawing on a wealth of primary and secondary sources, Ramage and Watkins demonstrate that the eyes of the nation often focused on Kentucky, which was perceived as a leader among the states before the Civil War. Globally oriented Kentuckians were determined to transform the frontier into a network of communities exporting to the world market and dedicated to the new republic. Kentucky Rising offers a valuable new perspective on the eras of slavery and the Civil War. This book is a copublication with the Kentucky Historical Society.
Visa hela texten

"With clear purpose and language, thorough gathering of facts, breadth of coverage, and effective interpretations and summations, Ramage and Watkins have made an important addition to the published material on our state's heritage and place in history." -- Kentucky Libraries "Wide-ranging in its coverage, strong in its scholarship, and wise in its conclusions, Kentucky Rising starts with Henry Clay and ends with Abraham Lincoln, two well-known figures in the state's story. But it is what is between that makes the book so important. The authors illuminate both the known and the lesser known parts of the story. As a results, readers find in these pages new and interesting information about art and architecture, culture and cholera, social life and steamboats, politics and the press, slavery and antislavery, war and peace, Union and Confederate, and so much more. This is a signal achievement." -- James C. Klotter, State Historian of Kentucky "Well researched, [Ramage and Watkins] explore the crucial but overlooked period from 1800 to 1865 when Kentucky ascended to become a leader in politics, science and education." -- Norhtern Kentucky Heritage "This wide-ranging survey of Kentucky's history through 1865 has two advantages for the reader. The book is organized by topic, and it covers a period of our history when Kentucky was a leader in education, politics, and valor." -- Arts-Louisville "The authors integrate the cultural, social, economic, and military history of the state into a highly readable, interesting story of antebellum Kentucky." -- Marion Lucas, author of A History of Blacks in Kentucky: From Slavery to Segregation "Revealing deep research into and knowledge of early Kentucky and frontier history, this book would work well in a college survey or for general readers interested in this period." -- Choice Magazine "Ramage and Watkins provide an extremely valuable survey of the state's development in the decades leading up to the war...No short summary can do justice to this very valuable work. Read it!" -- Blue & Gray Magazine "Ramage and Watkins make a convincing case that Kentucky, in the first half of the nineteenth century, was a politically, economically, and intellectually dynamic place that was viewed by many contemporaries as one of the leading states of the nation" -- Daniel P. Murphy, Journal of American Culture "James Ramage and Andrea Watkins's Kentucky Rising is the best single overview of antebellum Kentucky ever written. Skillfully weaving political history with the social and cultural aspects of early Kentucky, Ramage and Watkins have produced a lasting and excellent framework that future historians will learn from, expand upon, and contend with." -- Indiana Magazine of History "James Ramage and Andrea Watkins demonstrate a positive aura surrounding frontier Kentucky." -- Kentucky Monthly "Drawing on a wealth of primary and secondary sources, Ramage and Watkins demonstrate that the eyes of the nation often focused on Kentucky, which was perceived as a leader among the states before the Civil War." -- Civil War "An outstanding, beautifully written book that centers on Kentucky's contributions to the nation during the antebellum era." -- Bowling Green Daily News "A readable survey of the commonwealth's role in the formative years of the American Republic" -- H-Net Review