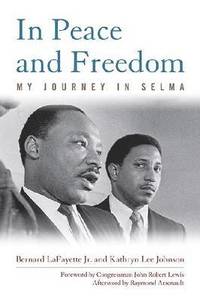 In Peace and Freedom

My Journey in Selma

av Bernard Lafayette, Kathryn Lee Johnson
Inbunden Engelska, 2013-09-30
789
Köp
Spara som favorit
Skickas inom 5-8 vardagar.
Fri frakt inom Sverige för privatpersoner.
Finns även som
Visa alla 3 format & utgåvor
Bernard LaFayette Jr. (b. 1940) was a cofounder of the Student Nonviolent Coordinating Committee (SNCC), a leader in the Nashville lunch counter sit-ins, a Freedom Rider, an associate of Dr. Martin Luther King Jr. in the Southern Christian Leadership Conference (SCLC), and the national coordinator of the Poor People's Campaign. At the young age of twenty-two, he assumed the directorship of the Alabama Voter Registration Project in Selma-a city that had previously been removed from the organization's list due to the dangers of operating there. In this electrifying memoir, written with Kathryn Lee Johnson, LaFayette shares the inspiring story of his years in Selma. When he arrived in 1963, Selma was a small, quiet, rural town. By 1965, it had made its mark in history and was nationally recognized as a battleground in the fight for racial equality and the site of one of the most important victories for social change in our nation. LaFayette was one of the primary organisers of the 1965 Selma voting rights movement and the Selma-to-Montgomery marches, and he relates his experiences of these historic initiatives in close detail. Today, as the constitutionality of Section 5 of the Voting Rights Act is still questioned, citizens, students, and scholars alike will want to look to this book as a guide. Important, compelling, and powerful, In Peace and Freedom presents a necessary perspective on the civil rights movement in the 1960s from one of its greatest leaders.
Visa hela texten

"The experience that changed both his life and the course of history was his leadership of the Alabama Voter Registration Campaign in Selma, Ala., from 1962 to 1965. LaFayette's new memoir, In Peace and Freedom: My Journey in Selma, offers an eye-opening look inside that pivotal era in American history." -- Tampa Bay Times "LaFayette, a product of the Nashville Movement, experienced extensive formal training in nonviolent techniques from the instruction of James M. Lawson Jr. Although the Selma Movement has drawn the attention of innumerable scholars, journalists, and participants, none have written about it as a successful experiment in Gandhian nonviolence learned in nonviolent workshops like the ones which Lawson operated. This is the vital and singular contribution that the LaFayette memoir offers to southern civil rights movement literature." -- Dennis C. Dickerson, author of African American Preachers and Politics: The Careys of Chicago "LaFayette provides a fascinating account of his courageous organizing work as, slowly and carefully, he organized the few local black activists willing to participate in a campaign to register black voters. LaFayette's book should be required reading for anyone who takes the right to vote for granted." -- The Southeastern Librarian "In this book by Bernard LaFayette Jr., we see a pattern of successful nonviolent action during the civil rights movement with MLK that became the basis for teaching in countries across the world." -- C. T. Vivian, President of SCLC (Southern Christian Leadership Conference) "Bernard Lafayette has lived through half a century of nonviolent activism. From Nashville to New York, from sit-ins to Selma. Bernard has been at the center of thought and action that attempts to free the world of violence and hatred. From California and Chicago to Colombia and Nigeria he has braved the threats and intimidation to witness for the power of non-violent action. You must read this book and he must write the next one soon; there are so few of us left who lived to tell the story of how we've overcome." -- Andrew Young, U.S. Ambassador to the United Nations, 1977--1979 "An inspiring story of the human qualities and sacrifices that helped bring about a world we sometimes take for granted." -- Kirkus "A life dedicated to King's idea of achieving peaceful ends through peaceful means." -- CBS News "[LaFayette's] memoir details just what it took to get an African American registered to vote in a state where, in some counties, that hadn't happened in more than 50 years. He worked with other brave men and women, overcoming white and black leaders who did not like outsiders, and trained black residents to pass the arduous literacy test. The specter of violence and death hung over them. The project came to a head in 1965 when he, Martin Luther King Jr., and thousands of others marched from Selma to Montgomery, AL, in support of voting rights, and Congress passed the Voting Rights Act. Throughout, LaFayette expounds on the principles of nonviolence and how they helped the movement. This book is for anyone interested in civil rights history, American history, or the philosophy of nonviolence. Recommended." -- Library Journal "[A] powerful history of struggle, commitment, and hope. No one, but no one, who lived through the creation and development of the movement for voting rights in Selma is better prepared to tell this story than Bernard LaFayette himself." -- from the foreword by John Robert Lewis, Representative, United States House of Representatives

Bernard LaFayette Jr. is Distinguished Senior Scholar-in-Residence at the Candler School of Theology at Emory University in Atlanta, Georgia, USA and the Chair of the National Board of the Southern Christian Leadership Conference (SCLC). Kathryn Lee Johnson teaches in the School of Education at the University of Rhode Island, USA. She has authored several books for educators on teaching, writing, and developing independent study skills.