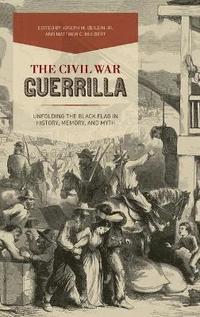 Unfolding the Black Flag in History, Memory, and Myth

av Joseph M Beilein Jr, Matthew C Hulbert
Inbunden Engelska, 2015-01-30
529
Köp
Spara som favorit
Skickas inom 10-15 vardagar.
Fri frakt inom Sverige för privatpersoner.
Finns även som
Visa alla 1 format & utgåvor
Most Americans are familiar with major Civil War battles such as Manassas (Bull Run), Shiloh, and Gettysburg, which have been extensively analyzed by generations of historians. However, not all of the war's engagements were fought in a conventional manner by regular forces. Often referred to as "the wars within the war," guerrilla combat touched states from Virginia to New Mexico. Guerrillas fought for the Union, the Confederacy, their ethnic groups, their tribes, and their families. They were deadly forces that plundered, tortured, and terrorized those in their path, and their impact is not yet fully understood. In this richly diverse volume, Joseph M. Beilein Jr. and Matthew C. Hulbert assemble a team of both rising and eminent scholars to examine guerrilla warfare in the South during the Civil War. Together, they discuss irregular combat as practiced by various communities in multiple contexts, including how it was used by Native Americans, the factors that motivated raiders in the border states, and the women who participated as messengers, informants, collaborators, and combatants. They also explore how the Civil War guerrilla has been mythologized in history, literature, and folklore. The Civil War Guerrilla sheds new light on the ways in which thousands of men, women, and children experienced and remembered the Civil War as a conflict of irregular wills and tactics. Through thorough research and analysis, this timely book provides readers with a comprehensive examination of the guerrilla soldier and his role in the deadliest war in U.S. history.
Visa hela texten

"Uniformly strong essays that will change how historians think and write about the Civil War and its memory. In this exciting volume are innovative methods, new comparisons, fresh perspectives, and an unfamiliar cast of characters. Its pages preview the future directions of historical scholarship on guerrillas and irregular warfare." -- Lorien L. Foote, author of The Gentlemen and the Roughs: Manhood, Honor, and Violence in the Union Army "These fresh and wide-ranging essays are mandatory reading for anyone hoping to understand the complexity of the guerrilla war. By asking new questions, posing new solutions, even employing new technologies, the authors show conclusively that the irregular conflict was something more than a "side-show" of the Civil War." -- Daniel E. Sutherland, University of Arkansas "The essays included in this volume underscore the compelling nature and significance of guerrilla warfare. Historians increasingly acknowledge that irregular warfare was in fact "decisive" to the conflict; but these authors further probe the motivations, narratives and memories by the guerrillas themselves. This is a vitally important book for all historians of the Civil War era." -- Lesley J. Gordon, author of A Broken Regiment: The 16th Connecticut's Civil War "The essays are well written and researched.... This volume covers a wide range of topics on Civil War guerrilla warfare and is recommended for the perspectives which its essays provide on this somewhat 'shadowy' subject. That the subject is now coming into its own can only be a good thing." -- Journal of America's Military Past "The eight essays in this volume are based in solid and [...] innovative research. For readers interested in understanding why guerrillas fought, how they influenced the course of the war, and, during the postwar period, how they remembered their role in the fighting, this is a solid read." -- Register of the Kentucky Historical Society "Here Joseph M. Beilein, Jr., and Matthew C. Hulbert offer a collection of essays that offer interesting and insightful takes on the subject of irregular war in the Civil War and make a solid contribution to this now quite well-plowed field of research." -- Journal of Military History "As Civil War scholarship continues to take a darker turn to unearth more stories pertaining to death, destruction, and suffering, the chaos (or controlled chaos) of guerrilla warfare logically should be front and center in that growing trend. The scholarship presented in this volume is fresh, well-researched and provocatively presented. The Civil War Guerrilla effectively injects race, region, and memory into our collective consciousness of guerrilla warfare, and the book is a must-read for academics, students, and Civil War enthusiasts." -- Brian Craig Miller, author of Empty Sleeves: Amputation in the Civil War South "A useful and fascinating work in a...neglected field. Highly recommended." -- Choice "A terrifically useful and important book. The essays in this collection explain the nature and logic of guerrilla actions in the Civil War and push scholars in new directions to investigate this central problem." -- Aaron Sheehan-Dean, Fred C. Frey Professor of Southern Studies at Louisiana State University "A quarter of a century after Michael Fellman's revolutionary reconsideration of Civil War guerrillas, this collection heralds a new generation of scholarly insurgents who again challenge current wisdom. Ranging from Virginia to the desert Southwest, diverse in methodology, and as attuned to the manufactured mythology of the black flag as to its complicated reality, The Civil War Guerrilla is a signal achievement of the conflict's sesquicentennial." -- Kenneth Noe, author of Reluctant Rebels: The Confederates Who Joined the Army after 1861 " The Civil War Guerrilla makes for essential reading for scholar

Foreword Introduction The Harder Way of War: The Ideological Basis of Irregular Warfare in the Western Border States Controlled Chaos: Spatiotemporal Patterns within Missouri's Irregular Civil War Violence, Conflict, and Loyalty in the Carolina Piedmont: A Comparative Perspective Indians Make the Best Guerillas: Native Americans and the War for the Desert Southwest, 1861-1862 The Business of Guerrilla Memory: Selling Massacres and the Captivity Narrative of Sergeant Thomas M. Goodman Tales of Race, Romance, and Irregular Warfare: Guerrillas Fictionalized, 1862-1866 In Search of Manse Jolly: Mythology and the Facts in the Hunt for a Post-Civil War Guerrilla "Nothing but Truth is History": William E. Connelley, William H. Gregg, and the Pillaging of Guerrilla History Afterword