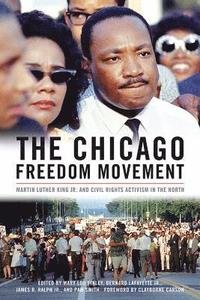 av Mary Lou Finley, Bernard Lafayette, James R Ralph, Pam Smith, Mary Lou Finley
Häftad Engelska, 2018-02-28
259
Köp
Spara som favorit
Skickas inom 7-10 vardagar.
Fri frakt inom Sverige för privatpersoner.
Finns även som
Visa alla 1 format & utgåvor
Six months after the Selma to Montgomery marches and just weeks after the passage of the Voting Rights Act of 1965, a group from Martin Luther King Jr.'s staff arrived in Chicago, eager to apply his nonviolent approach to social change in a northern city. Once there, King's Southern Christian Leadership Conference (SCLC) joined the locally based Coordinating Council of Community Organizations (CCCO) to form the Chicago Freedom Movement. The open housing demonstrations they organized eventually resulted in a controversial agreement with Mayor Richard J. Daley and other city leaders, the fallout of which has historically led some to conclude that the movement was largely ineffective. In this important volume, an eminent team of scholars and activists offer an alternative assessment of the Chicago Freedom Movement's impact on race relations and social justice, both in the city and across the nation. Building upon recent works, the contributors reexamine the movement and illuminate its lasting contributions in order to challenge conventional perceptions that have underestimated its impressive legacy.
Visa hela texten

This book makes a significant contribution to the understanding of the Chicago movement. It contains details about the Chicago Freedom Movement (tenant organizing, the North Shore project, the role of women, the role of nonviolence training with youth, the role of music, the lead poisoning campaign, etc.) that are usually left out or glossed over. Essential reading for historians, classrooms, and community activists."" - Tracy E. K'Meyer, author of Civil Rights in the Gateway to the South: Louisville, Kentucky, 1945--1980 "" The Chicago Freedom Movement is an exciting new treatment that explains the movement from a variety of points of view, including narratives from both historians and participants. The book presents voices and documentation in a fresh way that helps us to better understand the movement's goals, successes, and failures, as well as its legacy for us today. Both scholars and general readers will gain new perspectives from this story."" - Michael Honey, author of Going Down Jericho Road: The Memphis Strike, Martin Luther King's Last Campaign ""The civil rights movement is often viewed as a southern fight between white segregationists and a powerful black movement led by Dr. King. This perspective obscures the reality that racial inequality was deeply rooted in the north as well. In the mid-1960s the civil rights movement exploded ""up south."" The 1966 Chicago Freedom Movement led by Dr. King and an army of nonviolent activists was a pivotal struggle to overthrow northern racism. Here at last we have a book, The Chicago Freedom Movement, that tells the real story of this crucial northern civil rights movement through the voices of those who produced and led the movement. This book should be essential reading for anyone wishing to fully understand the rich and vast struggle for American democracy known as the civil rights movement."" - Aldon D. Morris, author of The Origins of the Civil Rights Movement: Black Communities Organizing for Change ""I don't see the Chicago Freedom Movement as a defeat. I think we can prove that. It was a victory. The efforts to address housing discrimination, integrate the schools and lessen the emotional and cultural separation between ordinary black people on the South and West Sides of the city gave Dr. King greater fame and glory than in any place outside of the South or Washington, DC. The stories I have read in this book are continuing evidence of why Chicago was such an important part of bringing about social change in America."" - Timuel D. Black Jr., community leader and author of Bridges of Memory: Chicago's First Wave of Black Migration ""If you liked the film Selma, you'll enjoy this book, because the Chicago Freedom Movement was the Selma of the North. This well-written volume captures the excitement of that movement and explores its legacy a half century later. Today's Black Lives Matter movement stands on the shoulders of an older generation of civil rights activists, including the Chicago Freedom movement. The book offers the kind of history lessons that we need to learn from the past. This volume - accessible to all readers - is a remarkable, inspiring achievement, clearly a labor of love among the activists and scholars who put it together."" - Peter Dreier. E.P. Clapp Distinguished Professor of Politics at Occidental College and author of The 100 Greatest Americans of the 20th Century: A Social Justice Hall of Fame "" The Chicago Freedom Movement is a wonderful and needed addition to the literature about this era in the city's and the country's history. The compelling first person narratives also remind us of the historical roots of today's activists, in cities like Chicago, who continue the fight against racial and economic injustice."" - Peter T. Alter, Historian & Director, Studs Terkel Center for Oral History, Chicag

Mary Lou Finley is a sociologist and professor emeritus at Antioch University Seattle and coauthor of Doing Democracy: the MAP Model for Organizing Social Movements. Bernard LaFayette Jr., former Distinguished Senior Scholar in Residence at Emory University's Candler School of Theology, is the chair of the national board of SCLC, and author of In Peace and Freedom: My Journey in Selma. James R. Ralph Jr. is Rehnquist Professor of American History and Culture at Middlebury College and author of Northern Protest: Martin Luther King, Jr., Chicago and the Civil Rights Movement. Pam Smith is a public historian and longtime Chicago consultant who served as a senior press aide to Jesse Jackson in his 1988 presidential campaign and to Barack Obama in his primary campaign for the US Senate. She is Executive Director of the Addie Wyatt Center for Nonviolence Training in Chicago.