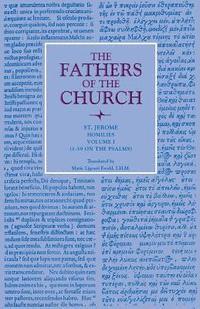 av Jerome
Häftad Engelska, 1965-01-01
479
Köp
Spara som favorit
Skickas inom 5-8 vardagar.
Fri frakt inom Sverige för privatpersoner.
This volume contains fifty-nine homilies preached by St. Jerome on selected Psalms. Jerome's knowledge of the "three Sacred Languages," Latin, Greek and Hebrew, his acquaintance with the exegetical methods of Antioch and Alexandria, his use of Origen's Hexapla and his work on the Psalter are impressive credentials for the quality of these works. As far as can be determined now these homilies were intended primarily for the instruction and edification of the monastic community that Jerome had established in Bethlehem where he spent the closing years of his life. They were recorded by scribes in the audience, and consequently the text may at times reflect the inadequacies of the listener. Whether all the homilies that appear here are extemporaneous products of Jerome's vast erudition and eloquence is a question that still awaits a satisfactory answer. Some scholars believe that an affirmative answer is correct, others citing the evidence of Homily 69 on Psalm 91, think that the content of some homilies is too deeply theological to be an impromptu composition. In any event, some patristic scholars have been bold enough to declare Jerome the most learned Latin Father of the Church.
Visa hela texten