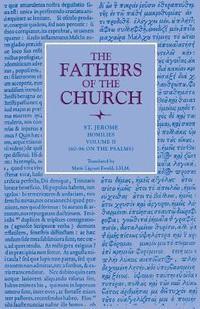 av Jerome
Häftad Engelska, 1966-01-01
479
Köp
Spara som favorit
Skickas inom 5-8 vardagar.
Fri frakt inom Sverige för privatpersoner.
This volume of the Homilies of Saint Jerome contains fifteen homilies on Saint Mark's Gospel, Homilies 75-84. In general, as in Volume 1, Morin's text has been followed as reproduced in the Corpus Christianorum, series latina 78. The editors of the Corpus have added two homilies, one delivered on the Feast of the Epiphany from the Gospel of our Lord's baptism and on Psalm 28, edited by B. Capelle; the other on the First Sunday of Lent, edited by I. Fraipont. In the present volume, they are Homilies 89 and 90. Dom Germain Morin, as noted in the Introduction of Volume 1 of this translation, discovered fourteen homilies, providing a second series on the Psalms, in four Italian Codices dating from the tenth and fifteenth centuries. He examined with great care their probable identity with, or relationship to, the lost homilies of Saint Jerome catalogues in De viris illustribus 'on the Psalms, from the tenth to the sixteenth, seven homilies.' There is more work to be done and many problems to be resolved, however, before this identification can be established with certitude. This chief obstacle is that of chronology. The De viris illustibus was written in all probability in 392-393, whereas the homilies appear to have been written in 402, the date determined by the study of Dom Morin. Other scholars, as U. Moricca, A. Penna, G. Grutzmacher, give 394 and 413 as the earliest and latest dates, respectively, for all the homilies. There is question also whether the Septuagint or the Hebrew Psalter was in the hands of Jerome when he wrote or preached the homilies on Psalms 10 and 15. They seem, in fact, to have been written rather than delivered, for he speaks of readers rather than hearers. They differ from the regular series of sermons in their greater erudition, more sophisticated language, many Greek expressions, and variations from the Hexapla. The closing doxology so characteristic of the other sermons is missing in them. They are much longer, and Jerome speaks of certain details as if he had already explained them. On the whole, they give evidence, too, of greater care in preparation.
Visa hela texten