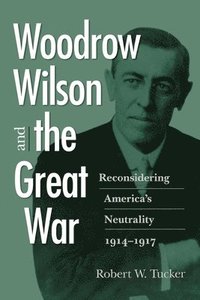 Woodrow Wilson and the Great War

av Robert W Tucker
Häftad Engelska, 2015-04-30
599
Köp
Spara som favorit
Skickas inom 10-15 vardagar.
Fri frakt inom Sverige för privatpersoner.
Finns även som
Visa alla 1 format & utgåvor
In recent years, and in light of U.S. attempts to project power in the world, the presidency of Woodrow Wilson has been more commonly invoked than ever before. Yet ""Wilsonianism"" has often been distorted by a concentration on American involvement in the First World War. In Woodrow Wilson and the Great War: Reconsidering America's Neutrality, 1914-1917, prominent scholar Robert Tucker turns the focus to the years of neutrality. Arguing that our neglect of this prewar period has reduced the complexity of the historical Wilson to a caricature or stereotype, Tucker reveals the importance that the law of neutrality played in Wilson's foreign policy during the fateful years from 1914 to 1917, and in doing so he provides a more complete portrait of our nation's twenty-eighth president. By focusing on the years leading up to America's involvement in the Great War, Tucker reveals that Wilson's internationalism was always highly qualified, dependent from the start upon the advent of an international order that would forever remove the specter of another major war. World War I was the last conflict in which the law of neutrality played an important role in the calculations of belligerents and neutrals, and it is scarcely an exaggeration to say that this law?or rather Woodrow Wilson's version of it?constituted almost the whole of his foreign policy with regard to the war. Wilson's refusal to find any significance, moral or otherwise, in the conflict beyond the law and its violation led him to see the war as meaningless, save for the immense suffering and sense of utter futility it fostered. Treating issues of enduring interest, such as the advisability and effectiveness of U.S. interventions in, or initiation of, conflicts beyond its borders, Woodrow Wilson and the Great War will appeal to anyone interested in the president's power to determine foreign policy, and in constitutional history in general.
Visa hela texten

"Masterful. In this revelatory book, Robert Tucker provides a wonderful example of how the complexities of the past, long since reduced to historical cliches, can be brought back to life by a scholar of keen eye and penetrating intelligence. This surgical dissection of Woodrow Wilson's neutrality policies promises to become the standard work on the topic.--Frank Ninkovich, St. John's UniversityIn this book, one of the most eminent authorities on American foreign policy addresses one of the most important parts of its history.... Through detailed and penetrating analyses of key issues and episodes, Tucker develops a powerful critique of Wilson's diplomacy as self-deceptive with regard to its claimed neutrality and not rationally directed toward the nation's interest in bringing the European conflict to an early end. While critical of Wilson, Tucker also provides a sympathetic and insightful account of his thinking, showing how Wilson's ideal of a new world order grew out of his ultimately unsuccessful attempt to keep America out of the war without sacrificing its international influence. --John A. Thompson, St. Catharine's College, Cambridge