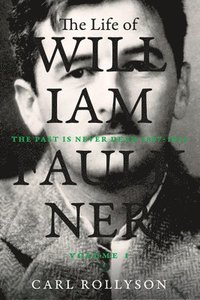 The Life of William Faulkner

av Carl Rollyson
Inbunden Engelska, 2020-03-24
319
Köp
Spara som favorit
Finns även som
Visa alla 1 format & utgåvor
Awarded the Nobel Prize in Literature in 1949, William Faulkner was a southerner who became widely regarded as one of the greatest American writers of all time. Despite being such a studied figure, however, to date no biography has captured the complexities at the heart of the man and his work. In The Life of William Faulkner, acclaimed literary biographer Carl Rollyson portrays a new Faulkner-a man of astonishing paradoxes. Based on extensive interviews with family and friends of Faulkner, as well as unparalleled access to primary and secondary source materials, this first of what will be a major two-volume work offers a dramatic narrative that breaks the bounds of the traditional literary biography.This first volume covers Faulkner's formative years. The oldest brother born into a family who had lost their glory, Faulkner at first excelled at school, until his teens when he defied family expectations by pursuing an interest in art and writing that promised no discernable profit for himself or others. World War I and its aftermath galvanized a new generation of writers, none more than Faulkner. Yet while his contemporaries Ernest Hemingway and F. Scott Fitzgerald were establishing themselves in Paris and New York, the shy Faulkner kept his distance, not even crossing the length of a cafe to introduce himself to James Joyce. Drenched in the culture of the Deep South, Faulkner came to write iconic novels of enduring literary significance, but his body of work also included Hollywood screenplays and potboilers for the Saturday Evening Post. Presenting himself as an aloof, self-proclaimed renegade artist, he was at the same time a dedicated family man. He could not create a cosmos of his own without having a sense of counterpull, of being in two places at once, like many of the characters in his novels. In letters to his friends and publishers, Faulkner frequently wrote of "this alarming paradox" that, Rollyson argues, would define his life. Integrating Faulkner's screenplays, fiction, and life, Rollyson argues that the novelist deserves to be reread not just as a literary figure but as a still-relevant force, especially in relation to issues of race, sexuality, and equality. The culmination of years of research in archives that have been largely ignored by previous biographers, The Life of William Faulkner offers a significant challenge and an essential contribution to Faulkner scholarship.
Visa hela texten

'A previously-unpublished, full-length screenplay by 20th-century novelist William Faulkner has been discovered, a murder story so complete experts say it could see him hit Hollywood again ... Professor Carl Rollyson, author of a forthcoming Faulkner biography, spoke of his "utter excitement" in finding it. He told the Telegraph: "Nobody knows about it, no film scholar, no Faulkner person."' - The Telegraph 'A deeply detailed account of the 1949 Nobel laureate's early life and work.... Throughout, the author, an expert biographer, delivers arresting details and telling images from his subject's life... A filling, satisfying feast for Faulkner aficionados.' - Kirkus Reviews (starred review) 'Despite Faulkner's objections to biography, he has not lacked for them....[Rollyson], however, is the first to examine all 105 boxes of material that Faulkner authority Carvel Collins collected for his unwritten account of the author. Tracing Faulkner's career through roughly the middle of the journey of his life, Rollyson reveals the impulses of Faulkner's fiction and shows how the author converted his experiences and those of his family and friends into poetry, short stories, and novels.... VERDICT: Rollyson's astute analysis makes not only for a good story but also a welcome addition to Faulkner studies.' - Library Journal '[Rollyson] suggest[s], tantalizingly, that Faulkner's Hollywood stint affected his novel writing.' -Publishers Weekly 'Carl Rollyson has done a fine job here, bringing together a vast range of source materials, drawing a sharp and convincing portrait of Faulkner. This reads like a good story, and it is. It's a great story, in fact, and all admirers of Faulkner should be grateful.' - Jay Parini, author of One Matchless Time: A Life of William Faulkner 'It has now been fifteen years since the publication of the last full-length biography of one of the twentieth century's most important writers, so the moment is ripe for a life of Faulkner with something new to offer readers and scholars. Rollyson has delivered a book that taps into new primary and secondary resources, and that draws on his own unique expertise as a professional biographer. This is a valuable new biography, whose sound, thorough research and judicious interpretive insights make for an appealing, balanced book.' -Jay Watson, University of Mississippi, author of William Faulkner and the Faces of Modernity 'This is the most comprehensive, most accurate, and most revealing biography of Faulkner yet written. Thoroughly and painstakingly researched, it draws upon sources and materials not available to previous biographers. It will almost certainly come to be viewed as the definitive biography of the famous author.' -Robert W. Hamblin, Founding Director of the Center for Faulkner Studies 'The Life of William Faulkner is the result of a remarkable amount of research and is clearly a work of love and respect for its subject and his writing. Its bibliography is 15 pages long, and it's difficult to imagine that anyone interested in Faulkner could require a supplementary reference after the second volume is released.' -Washington Independent Review of Books 'Rollyson's erudite narrative chronicles Faulkner's first thirty-seven years-from his childhood in Oxford to the publishing of masterpieces like The Sound and the Fury, As I Lay Dying, and Light in August-but it also gives careful attention to Faulkner's odd personal foibles (feigning a leg injury he supposedly sustained as a pilot in World War I, for instance-in reality he never took flight) and argues for a greater significance than has been previously acknowledged of his profitable career as a screenwriter in Hollywood.' -The New Criterion 'Rollyson's analysis of Light in August and his portrayal of Faulkner's 'pivotal' experiences in New Orleans are worth the wait.' -CHOICE