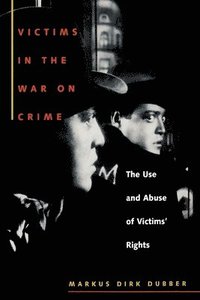 Victims in the War on Crime

The Use and Abuse of Victims' Rights

av Markus Dirk Dubber
Inbunden Engelska, 2002-07-01
869
Köp
Spara som favorit
Skickas inom 10-15 vardagar.
Fri frakt inom Sverige för privatpersoner.
Finns även som
Visa alla 1 format & utgåvor
Two phenomena have shaped American criminal law for the past thirty years: the war on crime and the victims' rights movement. As incapacitation has replaced rehabilitation as the dominant ideology of punishment, reflecting a shift from an identification with defendants to an identification with victims, the war on crime has victimized offenders and victims alike. What we need instead, Dubber argues, is a system which adequately recognizes both victims and defendants as persons. Victims in the War on Crime is the first book to provide a critical analysis of the role of victims in the criminal justice system as a whole. It also breaks new ground in focusing not only on the victims of crime, but also on those of the war on victimless crime. After first offering an original critique of the American penal system in the age of the crime war, Dubber undertakes an incisive comparative reading of American criminal law and the law of crime victim compensation, culminating in a wide-ranging revision that takes victims seriously, and offenders as well. Dubber here salvages the project of vindicating victims' rights for its own sake, rather than as a weapon in the war against criminals. Uncovering the legitimate core of the victims' rights movement from underneath existing layers of bellicose rhetoric, he demonstrates how victims' rights can help us build a system of American criminal justice after the frenzy of the war on crime has died down.
Visa hela texten

Dubber's book is an outstanding achievement: original and insightful, well-written and well-informed, deeply humane and at times even passionate. It deserves to have a significant impact not only on the way criminal justice is thought about by scholars, but also on the wider public policy debate. * Criminal Law Forum * Interesting, well-argued, and provocative. [Dubber] raises new and important issues about the role and impact of the victims rights movement. * Law and Politics Book Review * Victims in the War on Crime includes a valuable review of the development of victims rights and the war on crime and an interesting link of the two movements that have occurred in the same place and time. * Contemporary Sociology * Dubber pulls off quite an intellectual feat. First, he offers a ruthless expose on the so-called Victims Rights movement. Then he shows how the War on Crime, in which victims are enlisted, has little to do with real human victims in the first place. Where, he asks, are the victims in the vast array of possession offenses that are the heart of the War on Crime? He ends by conceiving what a legal system would look like if we were truly interested in victims as persons, not as pawns. This is a bold work of jurisprudence and also a practical blueprint for better policyone of the most original books on criminal law in recent years. -- Robert Weisberg,Edwin E. Huddleson, Jr. Professor of Law, Stanford University Dubber gives some powerful examples of how the law has developed haphazardly in response to individual victims' experiences. * The Howard Journal of Criminal Justice *

Bloggat om Victims in the War on Crime

Markus Dirk Dubber is Professor of Law at the University of Toronto. His many books include Victims in the War on Crime: The Use and Abuse of Victims' Rights (NYU Press, 2002).