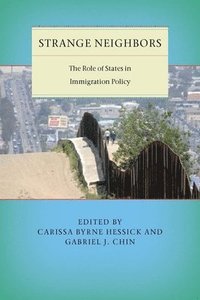 av Carissa Byrne Hessick, Gabriel J Chin
Inbunden Engelska, 2014-05-23
399
Köp
Spara som favorit
Skickas inom 5-8 vardagar.
Fri frakt inom Sverige för privatpersoner.
Since its founding, the U.S. has struggled with issues of federalism and states' rights. In almost every area of law, from abortion to zoning, conflicts arise between the states and the federal government over which entity is best suited to create and enforce laws. In the last decade, immigration has been on the front lines of this debate, with states such as Arizona taking an extremely assertive role in policing immigrants within their borders. While Arizona and its notorious SB 1070 is the most visible example of states claiming expanded responsibility to make and enforce immigration law, it is far from alone. An ordinance in Hazelton, Pennsylvania prohibited landlords from renting to the undocumented. Several states have introduced legislation to deny citizenship to babies who are born to parents who are in the United States without authorization. Other states have also enacted legislation aimed at driving out unauthorized migrants. Strange Neighbors explores the complicated and complicating role of the states in immigration policy and enforcement, including voices from both sides of the debate. While many contributors point to the dangers inherent in state regulation of immigration policy, at least two support it, while others offer empirically-based examinations of state efforts to regulate immigration within their borders, pointing to wide, state-by-state disparities in locally-administered immigration policies and laws. Ultimately, the book offers an extremely timely, thorough, and spirited discussion on an issue that will continue to dominate state and federal legislatures for years to come.
Visa hela texten

"In Arizona v. United States (2012), the Supreme Court delivered a landmark ruling that invalidated core provisions of Arizonas S.B. 1070, the controversial state immigration enforcement law that was a model for many states and localities seeking to buttress, and arguably expand on, federal immigration enforcement efforts. Strange Neighbors is one of the first book-length inquiries into the efforts by state and local governments to regulate immigration. With an insightful introduction by Jack Chin and Carissa Byrne Hessick, the book explains the emergence of state and local immigration enforcement laws, the historical antecedents to those laws, provide vigorous defenses of state and local immigration regulation by two of their most prominent advocates, and offer critical evaluations of the state and local efforts to regulate immigration. The authors of the chapters are leaders in the field and authors of some of the most exciting immigration law scholarship being published today. It goes without saying that Strange Neighbors is a 'must read' for anyone interested in immigration enforcement in the twenty-first century." -- Kevin R. Johnson,Dean, UC Davis School of Law "This book provides context, perspective, and the reasoning behind both sides positions. That makes it a valuable resource for anyone seriously interested in gaining a fuller and more nuanced understanding of the debate over federal and states rights in the immigration realm." * The Federal Lawyer * "The essays in Strange Neighbors provide new and timely insights into decades of debates about how laws, generated by state, local, and federal governments, create or mitigate the impact of national borders on millions of peoplein and outside of the United States." -- Judith Resnik,Arthur Liman Professor of Law, Yale Law School "A new collection of essaysStrange Neighborsshines a much needed light on state immigration activities and reveals that the federal governments impressive power over migrants lives is only one part of the story." * Crimmigration.com *

Acknowledgments IntroductionGabriel J. Chin and Carissa Byrne HessickI. The Recent Spate of State and Local Immigration Regulation 1. Measuring the Climate for Immigrants: A State-by-State AnalysisHuyen Pham and Pham Hoang Van 2. How Arizona Became Ground Zero in the War on 40 ImmigrantsDouglas S. MasseyII. Historical Antecedents to the Modern State and Local Efforts to Regulate Immigration 3. "A War to Keep Alien Labor out of Colorado": The "Mexican Menace" and the Historical Origins of Local and State Anti-Immigration InitiativesTom I. Romero IIIII. A Defense of State and Local Efforts 4. Reinforcing the Rule of Law: What States Can and Should Do to Reduce Illegal ImmigrationKris W. Kobach 5. The States Enter the Illegal Immigration Fray John C. EastmanIV. A Critical Evaluation of the New State Regulation 6. Broken Mirror: The Unconstitutional Foundations of New State Immigration EnforcementGabriel J. Chin and Marc L. Miller 7. The Role of States in the National Conversation on ImmigrationRick Su 8. Post-Racial Proxy Battles over Immigration Mary FanAbout the ContributorsIndex