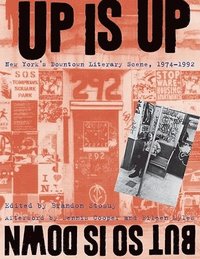 Up Is Up, But So Is Down

av Brandon Stosuy, Dennis Cooper, Eileen Myles
Inbunden Engelska, 2006-10-01
839
Bevaka
Spara som favorit
Tillfälligt slut – klicka "Bevaka" för att få ett mejl så fort boken går att köpa igen.
Finns även som
Visa alla 1 format & utgåvor
Among The Village Voices 25 Favorite Books of 2006 Winner of the 2007 AAUP Book, Jacket, and Journal Show in the Trade Illustrated Book Design category. Sometime after Andy Warhol's heyday but before Soho became a tourist trap, a group of poets, punk rockers, guerilla journalists, graffiti artists, writers, and activists transformed lower Manhattan into an artistic scene so diverse it became known simply as "Downtown." Willfully unpolished and subversively intelligent, figures such as Spalding Gray, Kathy Acker, Richard Hell, David Wojnarowicz, Lynne Tillman, Miguel Pinero, and Eric Bogosian broke free from mainstream publishing to produce a flood of fiction, poetry, experimental theater, art, and music that breathed the life of the street. The first book to capture the spontaneity of the Downtown literary scene, Up Is Up, But So Is Down collects more than 125 images and over 80 texts that encompass the most vital work produced between 1974 and 1992. Reflecting the unconventional genres that marked this period, the book includes flyers, zines, newsprint weeklies, book covers, and photographs of people and the city, many of them here made available to readers outside the scene for the first time. The book's striking and quirky design-complete with 2-color interior-brings each of these unique documents and images to life. Brandon Stosuy arranges this hugely varied material chronologically to illustrate the dynamic views at play. He takes us from poetry readings in Alphabet City to happenings at Darinka, a Lower East Side apartment and performance space, to the St. Mark's Bookshop, unofficial crossroads of the counterculture, where home-printed copies of the latest zines were sold in Ziploc bags. Often attacking the bourgeois irony epitomized by the New Yorker's short fiction, Downtown writers played ebulliently with form and content, sex and language, producing work that depicted the underbelly of real life. With an afterword by Downtown icons Dennis Cooper and Eileen Myles, Up Is Up, But So Is Down gathers almost twenty years of New York City's smartest and most explosive-as well as hard to find-writing, providing an indispensable archive of one of the most exciting artistic scenes in U.S. history.
Visa hela texten

"Some of us like our angels with dirty faces; witness the lovingly reproduced artifacts of Up Is Up, But So Is Down: New York's Downtown Literary Scene, 1974-1992, a comprehensive compendium of below-14th Street literary productions by everyone from Laurie Anderson to Nick Zedd, focusing on the output of small magazines of the era like Koff, Bomb, and Between C and D...[the] stories meld dry satire with heart-churningly desperate transmissions of damaged humanity." * Village Voice * "Exhilarating. . . . Up Is Up reproduces flyers and pages from lit mags to convey downtown's heady DIY ethos. The writing itself displays sensibilities that are at once fiery and cool. Cookie Mueller, Dennis Cooper, Wojnarowicz and many others merge crackling prose and a matter-of-fact tone to burrow into disturbing corners of sexual desire. AIDS takes a serious toll in the '80s, and becomes the haunting focus in amazing selections by novelist Gary Indiana and poet Tim Dlugos. Even as the scene begins to wind down, the book nails the deep thrills of talk and collaboration, especially in novelist Lynne Tillman's complex rendering of two friends' bar-set conversation. That gift for gab lives on in the epilogue, a spirited conversation between Eileen Myles and Cooper, who resist mythologizing but invoke the scene's glory nonetheless." * Time Out New York * "Up Is Up is a remarkable monument to the vibrancy of the Downtown scene. There are moments of romantic myth-making, dysfunctional beauty and hilarious profundity. It documents a now-gone era when lower Manhattan was an affordable oasis for artists, writers and musicians, when poetry and prose rubbed up against punk and visual art before drunkenly stumbling into an endless pansexual orgy." * New York Press * "This is a kind of three-decade book celebrating the possibilities of a self-sufficient writing community right under the nose of the decaying, increasingly irrelevant, empire of New York publishing." * American Book Review * "Up Is Up itself has a scrapbook feel. It gathers poems, excerpts and short stories as well as handmade magazine covers, pamphlets and posters that capture the collaborative, on-the-fly spirit of the period. . . . What is most arresting about UP IS UP is not its discovery of any individual genius but its invocation of an electrifying social energy that helped blast out an intellectual space for then-& transgressive female and gay writers." * New York Times Book Review *

Brandon Stosuy is a staff writer at Pitchfork, contributes to The Believer, Magnet, and the Village Voice, and has written for Bomb, Bookforum, L.A. Weekly, and Slate, among other publications. He lives in Brooklyn, where he is at work on his first novel.