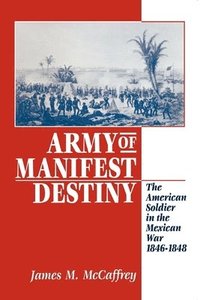 "From the letters of soldiers on the battlefield to analyses of military policy and procedures, this is an essential volume for anyone studying the Mexican War in depth." * Midwest Book Review * "Deals with every facet of the soldier's involvement, as opposed to the experiences of a single unit or individual. . . . it must rank as the best source on the subject. The literary style is suitable for virtually every level of reader and is remarkably easy to follow." * Choice * "McCaffrey is at his best conveying the personal dimension of the war experience. The real strength of the book lies in the effective arrangement of bit and pieces of letters and diaries, which reveal emotions and attitudes that are variously humorous, shocking, and poignant. . . . The story is compelling. . . . A well-researched and entertaining study that will hold the attention of students and general readers." * The Journal of Southern History * "James McCaffrey is to be commended. Army of Manifest Destiny illuminates the Mexican War as an episode in the on-going history of the American soldier, as a prelude to the Civil War military experience, and as a major event in the history of American expansion. A well-researched book which will be of use to anybody interested in the social history of the American soldier. Its easy style will make it attractive to the general reader as well." * Tennessee Historical Quarterly * "With effortless command of fact and an almost universal conversational writing style, McCaffrey (and his soldiers) bring us an on-the-spot understanding of Mexican War enlistment procedures, weaponry, punishments, disease and medical care, recreation, disdain for Mexican civilians, rivalry of volunteers with regular army men, food, shelter, and clothing. . . . This book fills a long-standing need. It may well become the Billy Yank of the Mexican War." * The Filson Club Historical Quarterly *

James McCaffrey is Assistant Professor of History at the University of Houston-Downtown and is the author of This Band of Heroes: Granbury's Texas Brigade, C.S.A.