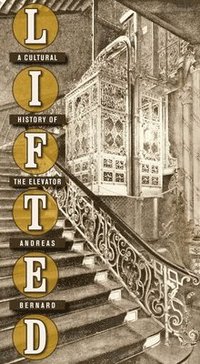 A Cultural History of the Elevator

av Andreas Bernard
Inbunden Engelska, 2014-02-14
319
Köp
Spara som favorit
Skickas inom 10-15 vardagar.
Fri frakt inom Sverige för privatpersoner.
Kan tyvärr inte längre levereras innan jul.
Before skyscrapers forever transformed the landscape of the modern metropolis, the conveyance that made them possible had to be created. Invented in New York in the 1850s, the elevator became an urban fact of life on both sides of the Atlantic by the early twentieth century. While it may at first glance seem a modest innovation, it had wide-ranging effects, from fundamentally restructuring building design to reinforcing social class hierarchies by moving luxury apartments to upper levels, previously the domain of the lower classes. The cramped elevator cabin itself served as a reflection of life in modern growing cities, as a space of simultaneous intimacy and anonymity, constantly in motion. In this elegant and fascinating book, Andreas Bernard explores how the appearance of this new element changed notions of verticality and urban space. Transforming such landmarks as the Waldorf-Astoria and Ritz Tower in New York, he traces how the elevator quickly took hold in large American cities while gaining much slower acceptance in European cities like Paris and Berlin. Combining technological and architectural history with the literary and cinematic, Bernard opens up new ways of looking at the elevator--as a secular confessional when stalled between floors or as a recurring space in which couples fall in love. Rising upwards through modernity, Lifted takes the reader on a compelling ride through the history of the elevator.
Visa hela texten

"The elevator, which today seems so boring, was once a vehicle of change of compelling power. Whoever reads this book will view the worlds elevators with different eyes." * Frankfurter Allgemeine Zeitung * "For most of us, the innocuous topic of the elevator is hardly the stuff of cutting-edge historical theory. But in this translation by Dollenmayer (German language & literature, Worcester Polytechnic Inst.), Bernard's groundbreaking 2011 German treatise on the revolutionary transformation of a mundane engineering marvel compels readers to reimagine what they think they know about the modern urban landscape. From Elisha Graves Otis's 1854 demonstration at the Exhibition of the Industry of All Nations in New York City to the modern day, Bernard (editor,Suddeutsche Zeitung) scans the literature, philosophy, and history related to the technological innovation and presents a lucid, engaging analysis of just how Otis's elevator has gone from its original 'luster of strangeness' to the 'dull and inconspicuous.' In the process, Bernard reminds us of Georges Canguilhem's dictum that the 'history of science is not a retrospective history of progress nor the depiction of outmoded stages leading to today's truth.' VERDICT Bernard's fascinating work on technological innovation, while at times a bit esoteric, will find a ready audience among readers with a passion for innovative philosophical and cultural histories. Fans of Wolfgang Schivelbusch'sThe Railway Journeymay especially find it appealing." * Library Journal,Brian Odom, Birmingham, AL Library * "This scholarly work celebrates the emergence of an invention we all take for granted." * Cincinnati Magazine * "A well-informed and engaging cultural history. . . . Whats more, Bernard manages to dissect processes that have shaped the transition from the 19th century to the 20th, illustrating the elusive phenomenon of 'modernity. After reading this study, it becomes at least temporarily impossible to use a lift without a brief contemplation of what it may particularly signify in the here and now." -- Ulrike Zitzlsperger * Times Higher Education * "[M]any readers will indeed get a lift fromLifted. It is a very special book thoroughly researched and clearly written, and about a subject of great historical interest to a diverse group of academic scholars as well as lay readers." * Journal of American Culture * "We live, in short, in the world that elevators made, andLiftedis a sharp-eyed, readable exploration of its making." -- A. Bowdoin Van Riper * Popmatters.com * "In a new book, 'Lifted,' German journalist and cultural studies professor Andreas Bernard zeroes in on this experience, tracing mankinds relationship to the elevator back to its origins and finding that it has never been a totally comfortable one. 'After 150 years, we are still not used to it,' Bernard said. 'We still have not exactly learned to cope with this . . . mixture of intimacy and anonymity.' That mixture, according to Bernard, sets the elevator ride apart from just about every other situation we find ourselves in as we go about our lives." -- Leon Neyfakh * The Boston Globe * "The elevator did more than make New York the city of skyscrapers, it changed the way we live, as German newspaper editor Andreas Bernard explains in Lifted." -- Stephen Lynch * New York Post * "Bernards passion for research is as impressive as the ease with which heelevator-likemoves between the disciplines of literature, art history, sociology, and psychology." * Der Spiegel * "A hugely atmospheric portrait of central European tenements and apartment buildings . . . it crackles with imaginative energy and is full of bright and memorable scenes. It is an excellent architectural history, a magical and valuable example of the work that can be produced within the discipline." -- Will Wiles * Icon Magazine * "By rendering it as an actor rathe

Andreas Bernard is editor of Suddeutsche Zeitung, Germany's largest daily newspaper. He received his Ph.D. in Cultural Sciences from the Bauhaus University Weimar, and teaches cultural studies in Berlin and Lucerne, Switzerland.

INTRODUCTION The History of Technology: New York, 1854 Inventing the Multistory Building Accidents THE BREACH THROUGH THE BUILDING: Organizing the Vertical A Theory of the Elevator Shaft Architectures of LinearityThe Void between Floors FROM ATTIC TO PENTHOUSE: The Vertical Hierarchy of Buildings Grand Hotels Garret Rooms, 1839: Poor Poets and Eloping Couples The Hygienists' Battle against the Tenement House The Semantics of the Attic around the Fin de Siecle Penthouses, Roof Gardens, and the Executive Suite CONTROLS The Elevator Operator at the Turn of the Century Push-Button Controls and the Path to Self-Operated Elevators A Brief Psychology of the Push Button INTERIORS The Stairwell The Assimilation of the Elevator Cab Urbanization and Spatial Fear: The Cab and Claustrophobia The Politics of the Elevator The Elevator in Literature, Film, and Advertising NotesBibliography About the Author About the Translator