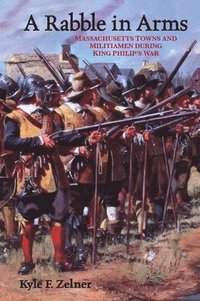 A Rabble in Arms

av Kyle F Zelner
Häftad Engelska, 2010-11-01
379
Köp
Spara som favorit
Skickas inom 10-15 vardagar.
Fri frakt inom Sverige för privatpersoner.
Finns även som
Visa alla 2 format & utgåvor
While it lasted only sixteen months, King Philip's War (1675-1676) was arguably one of the most significant of the colonial wars that wracked early America. As the first major military crisis to directly strike one of the Empire's most important possessions: the Massachusetts Bay Colony, King Philip's War marked the first time that Massachusetts had to mobilize mass numbers of ordinary, local men to fight. In this exhaustive social history and community study of Essex County, Massachusetts's militia, Kyle F. Zelner boldly challenges traditional interpretations of who was called to serve during this period. Drawing on muster and pay lists as well as countless historical records, Zelner demonstrates that Essex County's more upstanding citizens were often spared from impressments, while the "rabble" - criminals, drunkards, the poor- were forced to join active fighting units, with town militia committees selecting soldiers who would be least missed should they die in action. Enhanced by illustrations and maps, A Rabble in Arms shows that, despite heroic illusions of a universal military obligation, town fathers, to damaging effects, often placed local and personal interests above colonial military concerns.
Visa hela texten

Zelners meticulously researched A Rabble in Arms provides an important corrective to an accepted narrative about democratic egalitarianism in New England towns. Indeed, Zelners findings on the social composition of armed forces, rural democracy and localism in colonial New England correspond with modern works on popular and political culture in early-modern England, as well as Revolutionary and early-national America. -- Guy Chet,author of Conquering the American Wilderness Zelner has done meticulous research on the social composition of the Essex men who went to war in 1675-76. He has done a model job of mining sources to show the complexity of social and economic forces at work in raising military expeditions in Essex County. * The Journal of Military History * Rock-solid research, cleanly presented, answers for one corner of early New England the timeless question: Who serves, fights, and dies? For all the scholarly attention lavished on that part of American history, Zelner is the first to discover the truth. -- John Shy,author of A People Numerous and Armed A carefully researched account of how and why certain men from Essex County, MA, were chosen to fight in King Philip's War. * Choice * Zelner provides a valuable corrective to longstanding assumptions and misunderstandings about the English soldiery in King Philip's War while shedding new light on the powers and values of the elites of the town militia committees....[He] has fundamentally altered the discussion. * New England Quarterly *

Bloggat om A Rabble in Arms

Kyle F. Zelner is Associate Professor of History and a Senior Fellow of the Center for the Study of War and Society at the University of Southern Mississippi.