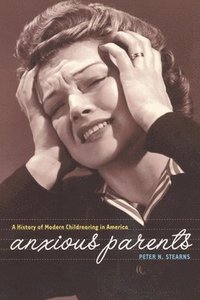 A History of Modern Childrearing in America

av Peter N Stearns
Häftad Engelska, 2004-11-01
339
Köp
Spara som favorit
Skickas inom 10-15 vardagar.
Fri frakt inom Sverige för privatpersoner.
Finns även som
Visa alla 2 format & utgåvor
The nineteenth and twentieth centuries saw a dramatic shift in the role of children in American society and families. No longer necessary for labor, children became economic liabilities and twentieth-century parents exhibited a new level of anxiety concerning the welfare of their children and their own ability to parent effectively. What caused this shift in the ways parenting and childhood were experienced and perceived? Why, at a time of relative ease and prosperity, do parents continue to grapple with uncertainty and with unreasonable expectations of both themselves and their children? Peter N. Stearns explains this phenomenon by examining the new issues the twentieth century brought to bear on families. Surveying popular media, "expert" childrearing manuals, and newspapers and journals published throughout the century, Stearns shows how schooling, physical and emotional vulnerability, and the rise in influence of commercialism became primary concerns for parents. The result, Stearns shows, is that contemporary parents have come to believe that they are participating in a culture of neglect and diminishing standards. Anxious Parents: A Modern History of Childrearing in America shows the reasons for this belief through an historic examination of modern parenting.
Visa hela texten

"(Stearns) has a keen appreciation of what really mattered to 20th-century Americans, in their families and beyond. Indeed, it is his easy command of all that was going on outside the home- and his profound grasp of the connectedness of those larger developments and their consequences for childreaing - that sets his study apart from other histories of the modern American family." * Journal of Social History * "Anxiety is the hallmark of contemporary parenting. Todays parents are tormented by fears of Sudden Infant Death Syndrome, child abductions, and juvenile drug and alcohol use. In perhaps his most timely and exciting book, Peter N. Stearns explains with wit and humane insight how modern mothers and fathers came to agonize incessantly about children's personality development, school performance, and psychological well-being." -- Steven Mintz,University of Houston "The book is more than a synthesis of existing scholarship. It is a compendium of ideas - some personal, mostly scholarly - about the experience of parenting in the United States since the beginning of the twentieth century. The book is imaginative and thought provoking." * History of Education Quarterly * "Stearns points to a number of contemporary phenomena, each of which he considers an expression of parental anxiety. Steans appears to be particularly sensitive to the upward mobility of kids grades." * The New York Review of Books * "In what is his trademark style, Stearns creates an artful synthesis that is both revelatory and captivating. An at times unsettling analysis of parental angst, the book is replete with worthy insights for historians and contemporary parents alike." * The Journal of American History * "A strong, effective, and readable portrayal of how twentieth-century American parents have invested and over-invested in their children. In a fairly short compass, Stearns has demonstrated many of the things that historians have tended to belabor-the role of expertise, why despite their declining numbers, children have become so important socially, the new realm of consumption, how the anxiety about children has become a central matter in twentieth-century culture and even an identifier of American life. Stearns knows what is going on and that children are not a means to express other anxieties, but the very source of many of the anxieties we express." -- Paula S. Fass,University of California, Berkeley

Peter N. Stearns is Provost and University Professor at George Mason University. Since 1967, he has served as editor-in-chief of The Journal of Social History. His numerous books include World History in Documents; American Behavioral History; and Anxious Parents.

ContentsPreface Acknowledgments 1 Anxious Parents: A 20th-Century History 2 The Vulnerable Child 3 Discipline 4 All Are above Average: Children at School 5 Work and Chores: Do I Have To? 6 I'm Bored: The Two Faces of Entertainment 7 Conclusion: The Impact of Anxiety Appendix Notes Index About the Author