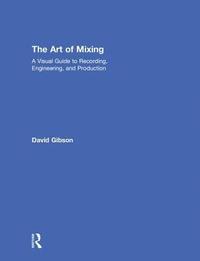 The Art of Mixing

A Visual Guide to Recording, Engineering, and Production

av David Gibson
Inbunden Engelska, 2018-12-13
1599
Köp
Spara som favorit
Skickas inom 10-15 vardagar.
Fri frakt inom Sverige för privatpersoner.
Finns även som
Visa alla 3 format & utgåvor
David Gibson uses 3D visual representations of sounds in a mix as a tool to explain the dynamics that can be created in a mix. This book provides an in-depth exploration into the aesthetics of what makes a great mix. Gibson's unique approach explains how to map sounds to visuals in order to create a visual framework that can be used to analyze what is going on in any mix. Once you have the framework down, Gibson then uses it to explain the traditions that have be developed over time by great recording engineers for different styles of music and songs. You will come to understand everything that can be done in a mix to create dynamics that affect people in really deep ways. Once you understand what engineers are doing to create the great mixes they do, you can then use this framework to develop your own values as to what you feel is a good mix. Once you have a perspective on what all can be done, you have the power to be truly creative on your own - to create whole new mixing possibilities. It is all about creating art out of technology. This book goes beyond explaining what the equipment does - it explains what to do with the equipment to make the best possible mixes.
Visa hela texten

David Gibson has been teaching, engineering and producing groups in major 24 track studios since 1982 and is the founder of Globe Institute of Recording and Production which offer classes in San Francisco and online. He has done recording for James Brown's band, Bobby Whitlock (Derek and the Dominoes), The Atlanta Rhythm Sections, Hank Williams Jr.'s band, members of the Doobie Brothers, Lacy J. Dalton, and Herbie Hancock. He is also the co-author of the top selling book on producing, The Art of Producing. Gibson is currently the #1 seller of Sound Healing music, also used in hospitals across the U.S, and he is the author of the best selling book, The Complete Guide to Sound Healing. Gibson is the inventor of the patented, Virtual Mixer mixing plug-in and a Virtual Reality healing system where you can place sounds inside a 3D image of the body.

LIST OF VISUALS PREFACES ACKNOWLEDGMENTS INTRODUCTION BEST OF THE COLOR VISUALS CHAPTER 1 - All Aspects of a Recorded Piece of Music CHAPTER 2 - Visual Representations of "Imaging" CHAPTER 3 - Guides to a Great Mix (Reasons for Creating One Style of Mix or Another) CHAPTER 4 - Functions of Studio Equipment and Visual Representations of All Parameters CHAPTER 5 - Musical Dynamics Created With Studio Equipment CHAPTER 6 - Styles of Mixes CHAPTER 7 - Magic in Music, Songs and Mixes CHAPTER 8 - 3D Sound Processors and Surround Sound Mixing CHAPTER 9 - Mixing Procedures APPENDIX A - Using an Equalizer Outline APPENDIX B - Mastering Outline APPENDIX C - Homework for the Rest of Your Life APPENDIX D - The Virtual Mixer Interface INDEX