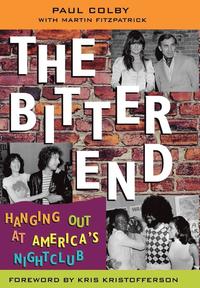 Hanging Out at America's Nightclub

av Paul Colby
Inbunden Engelska, 2002-05-01
239
Köp
Spara som favorit
Skickas inom 5-8 vardagar.
Fri frakt inom Sverige för privatpersoner.
Finns även som
Visa alla 1 format & utgåvor
The tale of the famous Greenwich Village coffeehouse turned nightclub, The Bitter End is also the story of the club's manager and owner, Paul Colby. From the early 60s to the 90s, the Bitter End hosted a wide range of influential music and comedy acts that reflected the changing creative atmosphere of the Village, and the country beyond. Pete Seeger made frequent appearances and Peter, Paul, and Mary debuted at the club during the height of the folk music boom, around the same time that Woody Allen and Bill Cosby were headlining with their very different-but equally popular-stand-up acts. After the British Invasion made rock the pre-eminent music in the land, Colby booked electrified folk and rock performers such as Neil Young, Carly Simon, Kris Kristofferson, and many others. Throughout the years, Colby kept up such strong friendships with the artists that they often returned as patrons when they weren't performing-the most famous local regular being Bob Dylan. The stories Colby shares of his amazing years running the Bitter End provide an insider's personal perspective on several decades of American entertainment. Told with fondness and flair, The Bitter End acquaints the world with a man beloved by performers for years.
Visa hela texten

Paul Colby... shares enough behind-the-scenes anecdotes to satisfy nostalgic and aficionado alike. * MOJO * Like a fly on the Bitter End's famous red-brick wall, Paul Colby has seen it all through six decades in the entertainment business. Pull up a stool and listen as he spins tale after revealing tale of the many musicians and comics who launched their careers at his landmark Greenwich Village nightspot. -- Ken Schlager, Editorial Director at <i>Billboard.com<i> You'll meet them all in the pages of The Bitter End: Paxton, Gibson-Cap, McGuinn, the Mitchell Trio, and countless others who made moving and innovative music. * Discoveries * Complete with period illustrations, the club's story and that of the Village from its prime up to the present is told from the chatty and thoroughly engrossing perspective on manager (and, later, proprietor) Paul Colby, who formed genuine friendships with many of the artists, famous and obscure. * Record Collector, (Uk) * The dust cover of this book bears the legend, " Hanging Out At America's Nightclub" and this book boils down to Colby's recollection of precisely that, allied to third party recollections, general comments and music business insights. * Folkwax *

Paul Colby has managed The Bitter End since 1968, and has owned it since 1974. Martin Fitzpatrick is currently collaborating with Tommy James on the singer's autobiography. They both reside in Montclair, New Jersey.