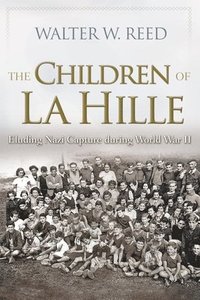 The Children of La Hille

av Walter W Reed
Häftad Engelska, 2015-12-30
239
Köp
Spara som favorit
Skickas inom 5-8 vardagar.
Fri frakt inom Sverige för privatpersoner.
Finns även som
Visa alla 2 format & utgåvor
Following the horrors of Kristallnacht in November of 1938, frightened parents were forced to find refuge for their children, far from the escalating anti-Jewish violence. To that end, a courageous group of Belgian women organized a desperate and highly dangerous rescue mission to usher nearly 1,000 children out of Germany and Austria. Of these children, ninety-three were placed on a freight train, traveling through the night away from their families and into the relative safety of Vichy France. Ranging in age from five to sixteen years, the children along with their protectors spent a harsh winter in an abanoned barn with little food before eventually finding shelter in the isolated Chateau de la Hille in southern France. While several of the youngest children were safely routed to the United States, those who remained continued to be hunted by Nazi soldiers until finally smuggled illegally across the Swiss Alps to safe houses. Remarkably, all but eleven of the original ninety-three children survived the war due to the unrelenting efforts of their protectors and their own resilience. In The Children of La Hille, Reed narrates this stunning firsthand account of the amazing rescue and the countless heroic efforts of those who helped along the way. As one of the La Hille children, Reed recalls with poignant detail traveling from lice-infested, abandoned convents to stately homes in the foothills of the Pyrenees, always scrambling to keep one step ahead of the Nazis. Drawing upon survivor interviews, journals, and letters, Reed affectionately describes rousing afternoon swims in a nearby natural pond and lively renditions of Moliere plays performed for an audience of local farmers. He tells of heart-stopping near misses as the Vichy police roundups intensified, forcing children to hide in the woods to escape capture. The Children of La Hille gives readers an intimate glimpse of a harrowing moment in history, paying tribute to ordinary people acting in extraordinary ways.
Visa hela texten

The book underscores the challenges overcome by all--parents, children, rescuers--in making it possible for most of these children to survive . . . a singularly detailed account of collective survival, and a fascinating one.--Pierre Sauvage, producer and director of the award-winning documentary film Weapons of the Spirit This stands by itself among the very few books and films that address the stories of children who survived the Holocaust. Reed's story tells his own tale; but along with it comes the constant and poignant tale of those Jewish parents, including his own, who knew they were virtually certain to die and wanted only the chance that their children might survive.--Richard P. Unsworth, senior fellow at the Kahn Liberal Arts Institute at Smith College Walter Reed provides a gripping account of the experiences which the children of La Hille endured as targets of the Nazis' murder machine - experiences which marked their lives and influenced their attitudes and behaviors. Through poignant description, Reed shares both the horrors and loss and the camaraderie of children who came together in their quest to live against the backdrop of the Holocaust.--Susan L. Abrams, CEO of Illinois Holocaust Museum & Education Center Walter Reed has done an admirable job of reconstructing the collective biography of the Children of La Hille, a group of some 100 youngsters, of which he was one, sent from Nazi Germany... riveting, inspiring and moving.--Michael Berenbaum, Director Sigi Ziering Institute Reed is to be commended for the careful archival work and the wide range of primary sources he was able to gather to reconstruct the stories of the nearly 100 children that sought refuge at La Hille as well as the adults that cared for them and helped facilitate their survival. --Shannon L. Fogg, author of The Politics of Everyday Life in Vichy France: Foreigners, Undesirables, and Strangers The Children of La Hille offers the treasure of an insider's intimate knowledge with the key added dimension of deep research. Drawing upon archival records, documents in private collections that have never been used before, as well as his own recollections, Walter Reed has pieced together a stunning rescue story that arced over the Atlantic.--Deborah Dwork, Director, Strassler Center for Holocaust and Genocide Studies, Clark University

Walter W. Reed (originally Werner Rindsberg) grew up in a Bavarian village near Wurzburg and experienced Nazi persecution of Jews, including arrest as a fourteen-year-old on Kristallnacht. After immigrating to New York in 1941, he served as an American soldier from 1943 to 1946, and as an interrogator of German prisoners in General Patton's Third Army, starting after the liberation of Paris in 1944. A graduate of the University of Missouri School of Journalism, USA, he pursued a forty-year career in public relations. Since 1998, he has been a frequent speaker about the Holocaust in the United States and in Europe.