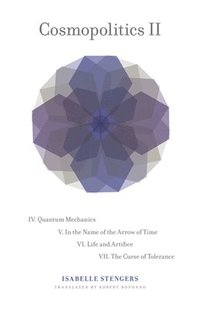 av Isabelle Stengers
Häftad Engelska, 2011-09-19
229
Köp
Spara som favorit
Skickas inom 10-15 vardagar.
Fri frakt inom Sverige för privatpersoner.
Finns även som
Visa alla 1 format & utgåvor
Originally published in French in seven volumes, Cosmopolitics investigates the role and authority of the sciences in modern societies and challenges their claims to objectivity, rationality, and truth. Cosmopolitics II includes the first English-language translations of the last four books: Quantum Mechanics: The End of the Dream, In the Name of the Arrow of Time: Prigogine's Challenge, Life and Artifice: The Faces of Emergence, and The Curse of Tolerance. Arguing for an "ecology of practices" in the sciences, Isabelle Stengers explores the discordant landscape of knowledge derived from modern science, seeking intellectual consistency among contradictory, confrontational, and mutually exclusive philosophical ambitions and approaches. For Stengers, science is a constructive enterprise, a diverse, interdependent, and highly contingent system that does not simply discover preexisting truths but, through specific practices and processes, helps shape them. Stengers concludes this philosophical inquiry with a forceful critique of tolerance; it is a fundamentally condescending attitude, she contends, that prevents those worldviews that challenge dominant explanatory systems from being taken seriously. Instead of tolerance, she proposes a "cosmopolitics" that rejects politics as a universal category and allows modern scientific practices to peacefully coexist with other forms of knowledge.
Visa hela texten

Trained as a chemist and philosopher, Isabelle Stengers has authored or coauthored more than twenty-five books and two hundred articles on the philosophy of science. In the 1970s and 1980s, she worked with Nobel Prize recipient Ilya Prigogine, with whom she wrote Order out of Chaos: Man's New Dialogue with Nature. Her interests include chaos theory, the history of science, the popularization of the sciences, and the contested status of hypnosis as a legitimate form of psychotherapy. She is a professor of philosophy at the Universite Libre de Bruxelles. Her books Power and Invention: Situating Science (1997), The Invention of Modern Science (2000), and Cosmopolitics I (2010) have been translated into English and published by the University of Minnesota Press. Robert Bononno has translated more than a dozen books, including Psychoanalysis and the Challenge of Islam by Fethi Benslama (Minnesota, 2009) and Decolonization and the Decolonized by Albert Memmi (Minnesota, 2006).

Contents Preface Book IV. Quantum Mechanics: The End of the Dream 1. Atoms Exist! 2. Abandon the Dream? 3. Niels Bohr's Lesson 4. Quantum Irony 5. The Physicists' Double Standard 6. The Silent Descendant of the Queen of Heaven Book V. In the Name of the Arrow of Time: Prigogine's Challenge 7. The Arrow of Time 8. Boltzmann's Successor 9. Boltzmann's Heir 10. The Obligations of Chaos 11. The Laws of Chaos? 12. The Passion of the Law Book VI. Life and Artifice: The Faces of Emergence 13. The Question of Emergence 14. The Practices of Emergence 15. Dissipative Coherence 16. Artifice and Life 17. The Art of Models 18. Transition to the Limit Book VII. The Curse of Tolerance 19. The Curse of Tolerance 20. The Curse as Test 21. Anxiety and Fright 22. The Politics of Technical Inventions 23. The Cosmopolitical Question 24. Nomadic and Sedentary 25. The Betrayal of the Diplomats 26. The Diplomat's Peace 27. Calculemus 28. The Final Challenge Notes Index